The Royal Geographical Society is delighted to welcome Professor John Seidel to lecture on “The Early Exploration of the American Colonies: Captain John Smith’s Expeditions to Virginia & Bermuda”.  In this lecture, Professor Seidel tells how the year 1607 opened a remarkable chapter in the colonisation of North America by England, with the settlement of a small group of men on Jamestown Island, in what is now Virginia, USA.  Jamestown owed its survival to the efforts of Captain John Smith, a prolific explorer, mapmaker and writer, who wrote multiple accounts of the new colony.  Then in 1609, part of a relief fleet on its way to Jamestown was wrecked in a hurricane, subsequently immortalised in Shakespeare’s The Tempest, with the flagship landing on a reef off the islands of Bermuda, with the crew penning descriptions of a new paradise.  Captain Smith, in another of his many expeditions, studied and mapped Bermuda, with tales replete with excitement and a fabulous cast of characters. 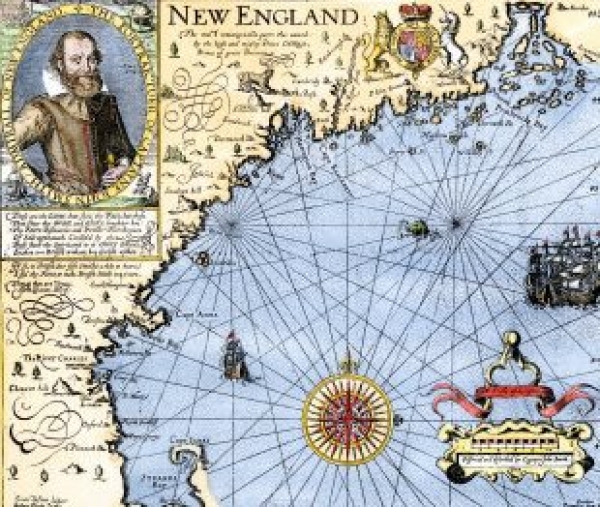 In 1607, the Virginia Company of London established a new colony at Jamestown, Virginia.  On a series of voyages from Jamestown, Captain Smith produced the first detailed map of North America’s largest estuary, the Chesapeake Bay.  His map and written descriptions provide a vivid description of the New World and its inhabitants at their first contact with Europeans.  Located on the James River, Jamestown was miserably sited and its success was anything but guaranteed.  A combination of problems plagued it from the beginning, including disease, hostile natives, poor water and the threat of Spanish discovery.  It owed its survival during the first few years to the efforts of Captain Smith, who studied and explored the new colony.  Captain Smith’s voyages up the Chesapeake, his encounters with Native Americans and his descriptions of the natural landscape were the product of a remarkable combination of energy and curiosity.

In 1609, part of a relief fleet on its way to Jamestown was wrecked in a hurricane, with the flagship landing on a reef off the islands of Bermuda.  During an enforced stay of ten months, the crew penned descriptions of a new paradise.  These accounts persuaded the Virginia Company of London, Jamestown’s sponsor, to colonise Bermuda.  As described by Captain Smith in another of his many books, the motivations for colonisation were the same in both Bermuda and Jamestown, with an overlapping cast of characters.  Despite these similarities, environmental constraints and other factors sent the two colonies in very different directions.  Captain Smith’s books, various maps, and recent archaeological and historical investigations, reveal some surprising contrasts between these two colonies and different responses to the two very different environments.  Geography and environment were at the root of both the drama and the emerging differences between these two colonies.  The lecture uses maps, history, archaeology, architecture and environmental investigation to follow the remarkably different trajectories of Virginia and Bermuda.

Professor John Seidel is Professor of Anthropology & Environmental Studies, Director of The Center for Environment & Society and Chairman of the Department of Sociology & Anthropology Washington College, Maryland, USA.  Professor Seidel is an archaeologist and environmental scientist who received his PhD from the University of Pennsylvania.  His international experience includes the Middle East and Central & South America, as well as the U.S. from Vermont to Louisiana.  His academic research has included classical archaeology in the Near East, investigations of the ancient Maya, research conducted for the U.S. National Park Service and work throughout the Eastern U.S. on sites ranging from the 19th century to 12,000 years ago.

Dr. Seidel is a past President of the Maritime Archaeological & Historical Society.  He is widely published, actively lectures to public and professional groups, and has received international awards for service, research and teaching.  He has appeared frequently on television, including in Diving Into History, a video series on underwater archaeology, and Gold of the Republic.