The Royal Geographical Society Hong Kong is delighted to welcome Sir Chris Bonington, one of the greatest mountaineers in history, and perhaps the most eloquent and entertaining lecturer to have spoken at the Society, to Hong Kong for a Gala Dinner.  On this occasion, Sir Chris lectures on "I Chose to Climb": Celebrating 65 years of Climbing the World's Greatest Peaks.  This is the story of his extraordinary career, from his first adventures on mountains in the early 1950s to his ascent of the Old Man of Hoy, a repeat of his famous first ascent, at the age of 80 last summer.  The lecture covers the best of his amazing adventures in between, including a tour of his first ascents in the great ranges, as always accompanied by unrivalled mountain photography.  He gives a very personal story of adventure, triumph and tragedy, shared with some of the greatest characters of mountaineering, illustrated with superb images and video. 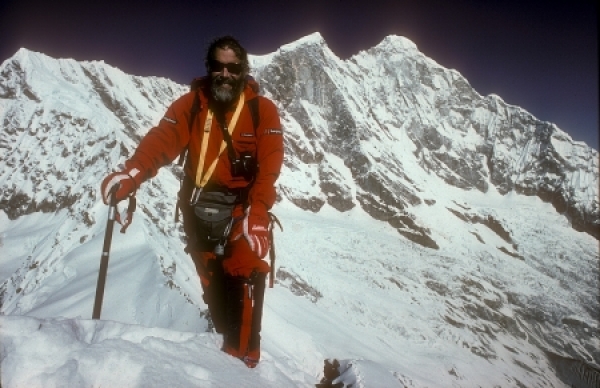 Chris Bonington captures the highlights of his formative years of climbing from when he started as a London schoolboy at the age of 16 to the first major expedition he led, climbing the huge South Face of Annapurna in 1970, at the time probably the hardest big face in the Himalaya.  He covers his early forays into Scotland, then on to the Alps with his success to be first Briton to climb the notorious North Face of the Eiger and to make the first ascent of The Central Pillar of Freney on the South side of Mont Blanc.

The lecture follows with the great climbs Sir Chris has done since then, including Mt Everest, to the present day.  Sir Chris discusses his epic first ascent and descent of the fearsome Ogre in Pakistan with Doug Scott.  Following their triumph, on the descent Doug Scott broke both legs while Sir Chris broke his ribs.  They went without food for five days while descending with their injuries in a savage storm, one of the most famous escapes in mountaineering history. The mountain has only had one further ascent, after some twenty attempts.

Sir Chris continues with his first ascent of Kongur, at the time the second highest unclimbed peak in the world.  He also talks of his alpine style ascents of Shivling in the Indian Himalaya and Panch Chuli.  He describes the ascent of Mount Vinson, the highest peak in Antarctica.  Sir Chris recounts the tale of his voyage to Greenland with sailor Sir Robin Knox-Johnston in the wooden yacht "Suhaili", in which Sir Robin had made the first circumnavigation of the world, when they pooled their mountaineering and sailing skills at the uninhabited, ice-bound north East Greenland coast.  Sir Chris concludes with his ascent of the Cathedral, a magnificent peak above the Arctic Circle, and other more recent ascents.

Sir Christian Bonington was educated at University College, London and at the Royal Military Academy, Sandhurst.  One of the greatest mountaineers in history, Sir Chris has made many celebrated first ascents, including the Central Pillar of Freney in the Alps, Annapurna II and Nuptse in the Himalayas, The Ogre in the Karakoram, Kongur in Sinkiang and the Central Tower of the Paine in Patagonia.  He has made some 26 expeditions to the peaks of central Asia, including 12 first ascents of peaks over 6,000 metres.

Sir Chris is also a highly successful author and broadcaster and has published 17 books, many of them best sellers.  He holds innumerable awards and has been President of the Alpine Club, Chancellor of Lancaster University and holds numerous other public positions.  He has been awarded the Founder’s Medal of the Royal Geographical Society.  Most recently, in 2010, he was made a Commander of the Royal Victorian Order for his services to Outward Bound and the Youth Hostels Association worldwide.

For this event, there is pre-booked individual seating available, or you may arrange a group at a table, or book a table of 12 people. Tickets are priced at HK$950 each for RGS Members with HK$1,150 each for guests, who receive complimentary membership of the RGS-HK until 31 March 2016.

The surplus from Royal Geographical Society -Hong Kong dinners, if any, is used to subsidise and make possible our programme of more than 60 lectures throughout the year, for the benefit of all Members and their guests. In addition, the Society runs an extensive scholarship programme for students. Your support for this is much appreciated.