New Approaches to the Origin of Birds from Carnivorous Dinosaurs

The Royal Geographical Society in conjunction with the University of Hong Kong is pleased to welcome Professor Mark Norell to speak on "New Approaches to the Origin of Birds from Carnivorous Dinosaurs". 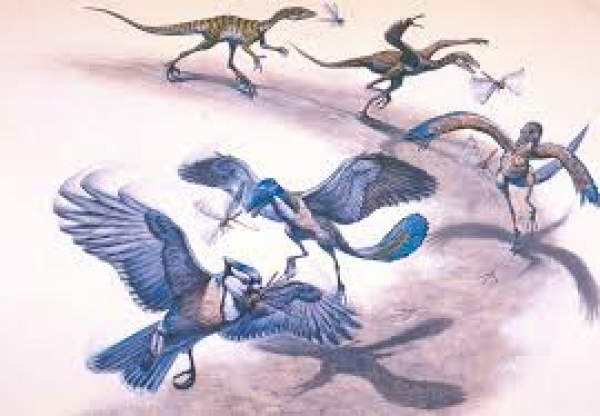 In the lecture, Professor Norell, one of the greatest palaeontologists of his generation, shows how new approaches are deepening our understanding of the origin of birds, which is well-established as being from carnivorous dinosaurs of the Jurassic Period.  While a close relationship between birds and dinosaurs was first proposed in the 19th century because of their similar skeletal features, Professor Norrell’s research has been axiomatic in refining the widely-accepted theory that birds actually came from dinosaurs.

This was achieved partly by Professor Norell discovering dozens of new carnivorous dinosaur fossil species, including ones with preserved feathers from Liaoning, China, now a new World Heritage Site.  Under his direction, a team of palaeontologists working in the Gobi desert since 1990 has produced a wealth of excellent specimens which have also garnered worldwide attention.  Currently, scientists’ knowledge of birds and non-avian carnivorous dinosaurs is very advanced, as it is known for example that they share similar respiratory systems and anatomy, as well as nest-building and brooding behaviours.

Professor Norell read Zoology at California State University and received an MSc from San Diego State University.  He then studied at Yale University, where he received an MPhil and PhD in Biology.  He was a professor at the Department of Biology, Yale University, before moving to the American Museum of Natural History, where he is the Division Chair and Macaulay Curator of the Division of Paleontology.  Professor Mark Norell works in several areas of specimen-based and theoretical research of fossil animals using traditional and new techniques.  His theoretical work uses methods for better understanding patterns in the fossil record.

Professor Norell is the author of more than 200 published scientific papers, nearly 100 other articles and has curated more than 25 exhibitions.  He has been the cover story of Time, Newsweek, the New York Times in addition to Nature and Science, the World’s two most prestigious scientific journals.  He has made documentaries for Nova Horizon, Discovery Channel and the History Channel.  He holds numerous awards from many nations and has led more than 50 international scientific expeditions, especially in Asia but also in Europe, South America and Africa.

Members and their guests are most welcome to attend this event, which is free of charge.