The Royal Geographical Society is pleased to welcome Paul Niel to speak on "Unclimbed Tibet: First Ascents in the Gangga".  In the lecture, Mr Niel speaks of his first ascents in the mountain ranges of East Tibet, part of Sichuan province, China, described by the legendary Japanese explorer Tomatsu Nakamura as the “Alps of Tibet”.  They are considered as one the last frontiers of mountaineering.  Mr Niel explored and climbed in Western Sichuan, in the eastern ranges of the Gangga massif, where he discovered the main mountain to be a large snow and ice peak, named “Dechok Phodrang” by local monks, meaning “Palace of the highest bliss”.  In cold and clear winter conditions, with temperatures reaching as low as -15 C°, his team managed to open two new routes on the Northwest face and climb its two main summits to 5,632m.  In his talk, Mr Niel describes details about the area, the challenges of venturing into the unknown, encounters with earthquakes and snow leopards, and shows for the first time material of this ultimately successful expedition, which is currently being made into a television documentary. 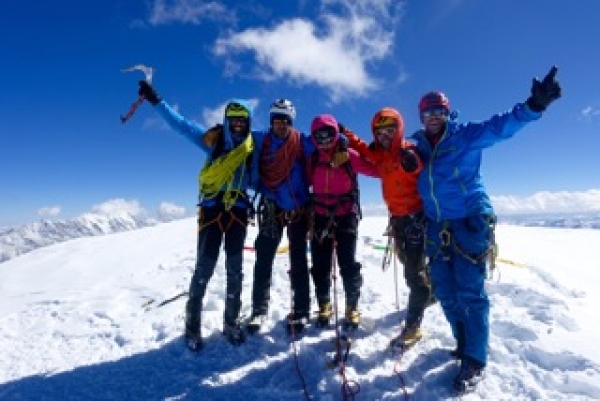 During November 2015, following a night in a high camp located in a large rock cave, the team braved a local earthquake to climb a great snow and ice route that traverses the whole face to reach the rocky north summit of Dechok Phodrang, measured at 5,550m.  Four days later, the climbers headed for the main summit.  Despite overnight snowfall, they ploughed for almost twelve hours through knee and hip deep snow up a couloir, climbed a large serac fall and stood eventually on the 5,632m Central Summit.  Austrian filmmakers Lothar Hofer and Martin Sochor were part of the expedition, making a documentary about the ascent and exploration, which is due to be published during 2016.

In the border area between Tibet and China, where the Tibetan Plateau drops off to the east, is one of the most beautiful mountain regions of the world.  This area, the source of Asia's most mighty rivers, the Yangtze, the Mekong and the Yellow River was one of last “white spots” on the map until the 1930s.  Even today, most of its mountain ranges are largely unexplored, and present one of the final treasure troves for alpinists.  Mr Niel and an international expedition explored during 2014 the yet uncharted Gangga range. The goal was true exploration, an adventure different to the commercialisation of Everest and other big mountain ranges in the world.  They found a Tibet far away off the tourist trail, rich in culture and breathtaking in nature, but also notoriously unreliable in weather.  After almost a month, an attempt to scale a dominating roc k peak ended in a thunderstorm a few hundred metres below the summit.  In October 2015, Mr Niel revisited the area during 2015, aiming successfully for the higher and difficult east part of the mountain range, the subject of this lecture.

Paul Niel is a Hong Kong based mountaineer and adventurer, who graduated from the University of Vienna.  He has travelled the globe for expeditions and other adventures that have taken him to places as disparate as Kamchatka, Papua, the Arctic Circle and across the Atlantic Ocean in a sailing yacht.  Over the last ten years, he has successfully climbed the highest mountains on every continent, the celebrated “7 Summits”, became one of just a handful of climbers to climb two 8,000m peaks on the same day, Mt Everest and Mt Lhotse, and achieved several first ascents in Antarctica.  In the spring of 2013, Paul Niel successfully climbed Mt Everest, with global media interest, since he summited just prior to the Diamond Jubilee of the first ascent.  He has travelled to more than 90 countries, sailed across the Atlantic and drove a Tuktuk more than 3,000km through India to raise awareness for girls’ education.  He actively works with Nepal based charity dZi and Indian charity Educate Girls and is a frequent keynote speaker and contributor to magazines.