Mind over Mountains: From International Rugby to the Seven Summits

The Royal Geographical Society is delighted to welcome British sportsman Richard Parks to speak on "Mind over Mountains: From International Rugby to the Seven Summits".  In the lecture, Mr Parks tells of his astounding journey from a Welsh International Rugby player to an extreme environment athlete, who has achieved records both climbing the Seven Summits and trekking to both poles, taking on expeditions and challenges that push the boundaries of human performance in the world’s most hostile environments.  Using footage from his BBC documentary series, which sold in more than 100 countries, as well as breathtaking photography of his Rugby and expeditions careers, Mr Parks gives an intimate and insightful lecture sharing his experiences and passions for performance. 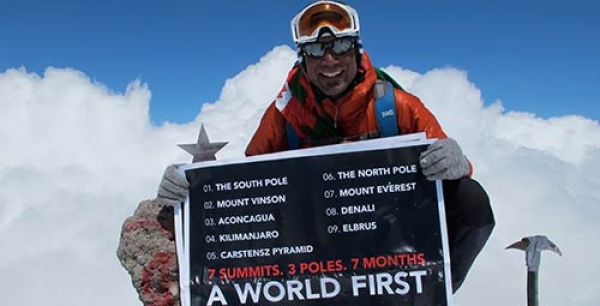 As a professional rugby player, Mr Parks made a name for himself as a hard and prolific tackler, representing Wales and The Barbarians.  During his professional career spanning 13 years, he played for Pontypridd, Leeds, Perpignan and Newport Gwent Dragons.  He won the Principality Cup with Pontypridd and The Powergen Cup with Leeds.

Following his retirement from rugby, Mr Parks made history twice with two incredible feats of endurance.  On his world-first expedition, called the 737 Challenge, in 2011 he became the first ever person to climb the highest mountain on each of the world's 7 continents, the famous Seven Summits, and stand on all 3 poles, the North Pole, the South Pole and the summit of Everest, all within 7 months.

In 2014, Mr Parks then became the fastest Briton in history to ski solo, unsupported and unassisted from the coast of Antarctica to the South Pole, taking an astonishing 9 days off the previous British record and becoming the first Welshman to complete this iconic feat.  He completed the 1,150 km solo journey from Hercules Inlet on the coastline of Antarctica to the South Pole in 29 days, 19 hours and 24 minutes.  Mr Parks skied a total of 366 hours, using the calorific equivalent of two marathons a day, pulling his pulk, which weighed around 68.2 kg.  Both these expeditions were broadcast nationally on BBC and Channel 5 and sold to over 107 countries.  He is now highly respected as one of the world’s leading extreme-environment athletes.

Mr Parks’s passion is now to use these projects to add value, through innovative scientific research, education and charitable objectives.  His critically acclaimed book Beyond the Horizon was published in the UK in September 2014 and is due to be published in France, Italy and elsewhere.  Beyond the Horizon won the Cross British Sports Book of the Year 2015.  Mr Parks is a board member of Sport Wales.  During 2016, he is embarking on his next world-first expedition, studying for a PhD and producing more compelling television documentaries.  He speaks worldwide on rugby, expeditions and motivations.