A Decade of Adventures: 25 non-motorised expeditions of 1,000 miles each

The Royal Geographical Society is delighted to welcome British adventurer Dave Cornthwaite to share tales from “A Decade of Adventure: 25 non-motorised expeditions of 1,000 miles each”.  In this amusing and inspiring lecture, Mr Cornthwaite speaks of his transition from self-confessed “awful graphic designer” to professional adventurer, explorer, travel writer and filmmaker.  His 12-year Expedition1000 project has been called one of the 21st Century’s most audacious adventures, a plan to undertake 25 separate journeys of 1,000 miles or more, each using a different form of non-motorised transport.  He has currently completed 11 out of the 25 planned expeditions, from skateboarding across Australia to swimming over 1,000 miles down the Missouri River, to paddle boarding the length of the Mississippi and taking a pedal-powered k ayak across Scandinavia. 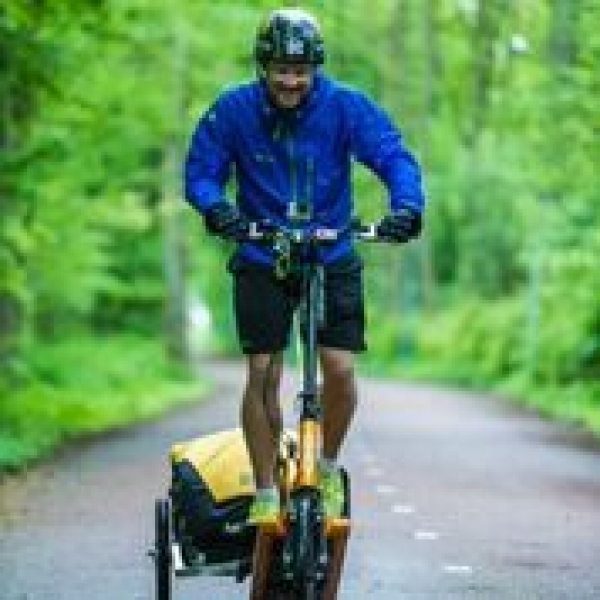 Using footage and photos to illustrate his experiences, Mr Cornthwaite delivers the talk with an honest, candid and humourous style that has entertained audiences around the world.  His lecture is structured as a journey of discovery, with his journeys on land, wheel and water packed with anecdotes, humble audacity and a reminder that the world of adventure is not limited to extreme athletes.

Some of his most famous journeys include his skateboarding along Britain's End-to-end route from John O'Groats to Lands’ End, a distance of 1,442 km taking 35 days.  He subsequently skateboarded right across Australia, one of his greatest feats.  With Sebastian Terry, he then tandem biked 2,300 km from Vancouver, Canada, to Las Vegas, USA.  On the world’s waters, he made a Guinness World Record-setting journey stand-up paddle-boarding 3,780 km down the Mississippi River from its source at Elk Lake in Minnesota to the Gulf of Mexico.  The descent of the Mississippi River took 68 days, including through waterfalls, dams and locks, and was successfully completed despite a hurricane hitting the region.

One of his most audacious feats was swimming 1,611 km down the Missouri River, from Chamberlain, South Dakota to St. Louis, Missouri, pulling his provisions along behind him on a raft.  He has also sailed 5,079 km from Cabo San Lucas, Mexico, to Honolulu, Hawaii, pedal-power kayaked across Scandinavia and became the first person to cross Lake Geneva on a paddleboard.  He has nine world records for these plus other amazing feats.

David Cornthwaite hails from Lincolnshire, England, and is now a well-known adventurer, writer and filmmaker.  He has broken nine world records in the last ten years and covered over 20,000 miles without motors.  Mr Cornthwaite has written three books, including the bestseller BoardFree: The Story of an Incredible Skateboard Journey Across Australia, and is a regular contributor to magazines.  Mr Cornthwaite has also made documentaries about his expeditions and those of other British adventurers.  He is an ambassador for The Blue Project, a climate and oceans project that brings together elite sports men and women to promote a clean environment.  Mr Cornthwaite has spoken worldwide on his adventures, while garnering over GBP1 million for charities.