Girls on Wheels: Cycling 15,000 km from London to Hong Kong

The Royal Geographical Society is pleased to welcome Julia Mason and Bethany Martin to speak on “Girls on Wheels: Cycling 15,000 km from London to Hong Kong”.  Julia & Bethany cycled 15,633 km, taking 299 days, crossing 20 countries, 2 deserts and 3 mountain ranges.  In the lecture, they tell the extraordinary story of the expedition, in which every day brought new challenges whether it be the distance to cover, finding food, shelter, communicating in a new language, or building a tent without poles.  The charitable side of the project was a social media strategy aiming to educate about the value of food globally and support charities tackling the issue of food waste worldwide. 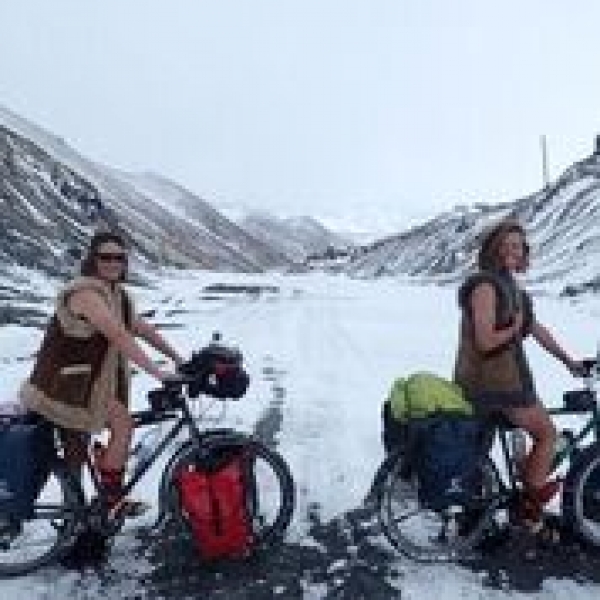 On 11 April 2015, Julia & Bethany stood outside Buckingham Palace, waved goodbye to friends and cycled with the exciting anticipation about the world between their two homes.  Europe was a training run, for falling off bikes, trying to hill start with a 50 kg bike beneath them, getting very lost, ending up in swamps at 3 am and camping next to hidden, but very much in use, railway tracks.  They arrived in France without a map and a compass that didn’t point north.  Luckily, two ladies pointed them in the direction of Belgium.  From there they cycled down the Rhine for a week and then across to the Danube, following it through to Bulgaria where they left the river and picked their way through the Bulgarian mountains, always on guard for dog chases.

Arriving in Turkey introduced them to a world of new hurdles; no more cycle paths, no more German speakers, a new culture, a new religion and fears fuelled by the media.  They then headed into Georgia, where they fended off the lethal homemade moonshine “Jaa” and explored the Kakheti wine region.  They caught the elusive ferry across the Caspian Sea to Kazakhstan from Baku, Azerbaijan and then faced 1,500 km of the Kizil Kum desert in Uzbekistan.  The biggest concern was where to find food and water.  They started asking lorry drivers for water, who frequently also handed Julia & Bethany a melon and some naan bread.

Tajikistan was a real highlight, cycling along the famous Pamir Highway, the second highest highway in the world incredible.  They cycled along the border of Afghanistan before heading up into the mountains and reached their highest altitude of 4,655 m.  It was “touch and go” as to whether they would enter China with their bikes, after they got caught in a blizzard.  They left the snow and entered China straight to the desert.  Following three weeks skirting along the northern border of the Taklimakan desert, they climbed up onto the Qinghai-Tibetan Plateau.  There, they were arrested by 30 policemen and a riot van, which was probably the lowest point of the journey.  Julia & Bethany were held for 36 hrs for entering a restricted zone.  They then cycled through the fascinating Tibetan Alba region of Gansu and Sichuan province, where they spent a lot of time eating yak butter and barley and spent Christmas in a Tibetan monastery.  They made a quick stop in Chengdu to see the pandas and from there it was non-stop until Hong Kong, where they arrived on 3 February 2016.