The Golden Jubilee of America's First Ascent of Everest

The Royal Geographical Society is pleased to welcome Broughton Coburn to speak on “The Golden Jubilee of America's First Ascent of Everest”.  In the talk, Mr Coburn speaks, 50 years after the greatest climb in American history, of a remarkable story of men and mountain.  Mr Coburn’s richly illustrated lecture is a riveting chronicle of the iconic first American expedition to Mt. Everest, in the spring of 1963. 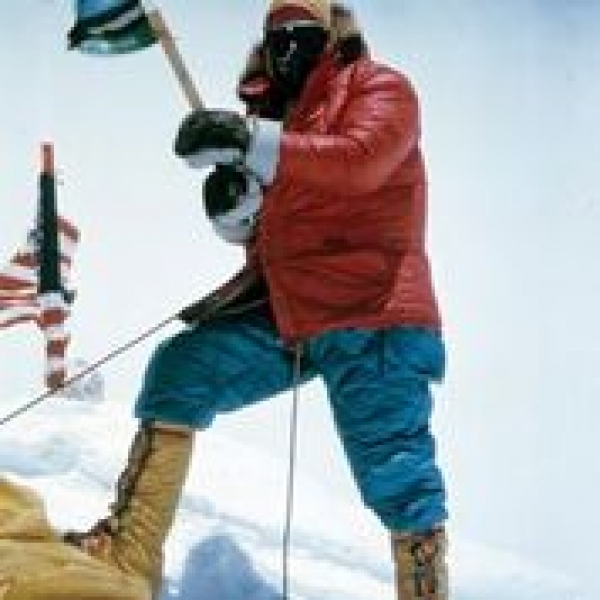 In the midst of the Cold War, against the backdrop of the space race with the Soviet Union and the civil rights movement, a band of iconoclastic, independent-minded American mountaineers set off for Mt. Everest, aiming to restore America’s confidence and hope.  The British and the Swiss had summited, but the Soviets and the Chinese had not.  The peak would become another proving ground in the battle for dominance between East and West.

The Americans’ audacious plan included reaching the top from two directions, one of which would take them up the never-before scaled West Ridge, an unforgiving path of ice and rock that would test not just their physical endurance, but also their very psychological soundness.  All the while, they didn’t know until they reached the top whether they would find a bust of Chairman Mao waiting for them.

The lecture is a harrowing, character-driven account of this momentous climb and its legendary team of inspiring and troubled climbers, who suffered injuries and a near mutiny on the mountain. It is also an examination of the expedition’s profound sway over the American consciousness during a time when the country was searching for its identity.  Mr Coburn also discusses one of the expedition’s little-known outcomes: the selection of a team to plant a CIA surveillance surveillance device on a Himalayan peak, to spy into China, where nuclear missile testing was underway.

Broughton Coburn hails from Wyoming, USA, and was educated at Harvard University.  For two decades, Mr Coburn resided in the Himalaya directing development and conservation projects for the World Bank, World Wildlife Fund, United Nations, and other agencies, and he is regarded as a premier authority on the region.  Of this, for three years he resided in the homeland of the Sherpas, on the skirts of Mt. Everest.  He is a Visiting Professor at Colorado College, and has written or edited seven books, including two New York Times bestsellers.  He has written three books that illustrate the history, grandeur and culture of Mt Everest: “Everest: Mountain Without Mercy”, a New York Times bestseller and National Geographic Books’ 2nd-biggest selling title in their publishing history,  “Triumph on Everest”, an award-winning young adult title, and a collaboration with Jamling Tenzing Norgay, “Touching My Father’s Soul”, another bestseller.  His latest book is “The Vast Unknown: America’s First Ascent of Everest”.