The New Silk Road: from London to China via Africa

The Royal Geographical Society is pleased to welcome Claire Le Hur and Stuart Block to speak on "The New Silk Road: from London to China via Africa”.  In the talk, Claire and Stuart describe the amazing story of how they have spent the last 9 months cycling from Canary Wharf to China along a rather circuitous route.  They have been following a 'new silk road' which has taken them through Africa to Asia along the new East-West trade routes, looking at the raw materials mined in Africa which are then shipped to Asia.  They describe their fabulous experiences, mixing travel adventures with some economic & geographical insights from their journey. 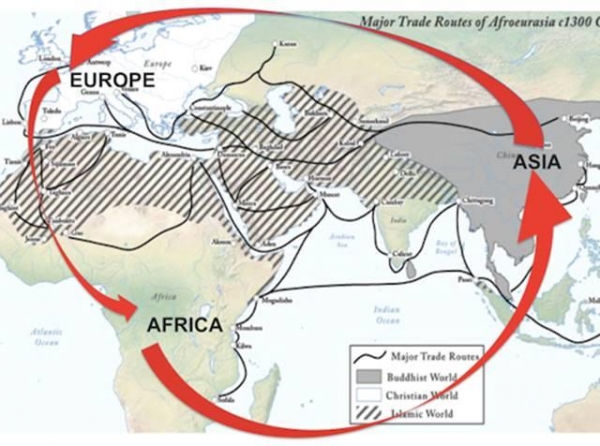 Setting off in September 2015, Stuart Block and Claire Le Hur are cycling to China on “Thandie”, a tandem used by Stuart on an epic 2012 cycle ride from London to Cape Town via the Sudan during its civil war.  They have kept the back seat of the tandem free for those they have met en route, giving them close relationships in all the countries they have visited.  Claire is riding a bamboo bike, built by an African social enterprise that Stuart helped to set up during his original trip.  After a short European 'warm up' they started their journey in East Africa going through 17 countries to reach Hong Kong.

The route followed the journey of key natural resources used in smartphones, such as copper and gold, along their supply chains to resource- hungry Asia, in particular China.  Stuart and Claire have been telling the story and connecting with classrooms around the world using a Fairphone, a social enterprise manufacturing 'fair' trade smartphones.  They are exploring the shifting balance of power in the world economy, and other geographical, historical and linguistic themes in an educational project aimed at students worldwide.  In partnership with the British Council’s connecting classrooms programme, they produce blogs, videos, skype lessons and other educational resources examining themes that have helped shape economic development over the centuries, including trade, technology and education.

Stuart Block read Economics at Cambridge.  He worked for eight years as an economist in the City, initially at Schroders before covering global themes at Citigroup.  These included comparing the technology boom with previous industrial revolutions and the current growth of emerging market consumption.  He wrote a top rated economics daily and appeared on Bloomberg, Reuters and BBC television.  In 2009, he moved to teaching at Cranleigh School, being promoted in 2010 to head of Economics and Business Studies.  His 2012 cycling venture to Africa helped to build and consolidate links for Cranleigh with Kawama community school in Zambia.  In July 2013, he moved to Morpeth Comprehensive School in Tower Hamlets, London to introduce Economics GCSE and A Level, where he is now Head of Department.

Claire le Hur read Classics at Cambridge, and then read for a MPhil in second language education.  She teaches Latin, Ancient Greek, French and Classical Civilisation and was head of Classics at Rugby School from 2007- 2014.  She is now working at Colfe’s School, teaching Classics and co-ordinating their outreach work.  Prior to the trip, she was a novice cyclist, with her debut on a road bike up the famous Col de la Colombière in the snow.