K2 – the Tragedy and the Triumph

Adrian Hayes
Monday, 13 Jun 2016
Google Calendar Outlook Calendar
Session 1: Drinks Reception 5.30 pm; Lecture 6.00 pm Session 2: Drinks Reception 7.30 pm; Lecture 8.00 pm
1/F, The Hong Kong Club, 1 Jackson Road, Central
This lecture requires PRE-REGISTRATION. Please send an email to This email address is being protected from spambots. You need JavaScript enabled to view it. to state the number of tickets you would like to book; there is no need to pay for your tickets in advance. Member: Mr Timothy Peirson-Smith. Please note that no denim, T-shirts or sportswear are permitted at the HK Club

The Royal Geographical Society is pleased to welcome Adrian Hayes to Hong Kong again, to speak on  “K2 – the Tragedy and the Triumph”.  In the lecture, famous mountaineer and adventurer Adrian Hayes details his 2013 tragic failure, followed by his successful summiting in 2014, of the world’s second highest mountain, the notorious K2.  In this powerful visual presentation and story, Mr Hayes details the grim history of K2, the challenges, dangers and risks, together with his three years of dedication to an ever-absorbing goal. 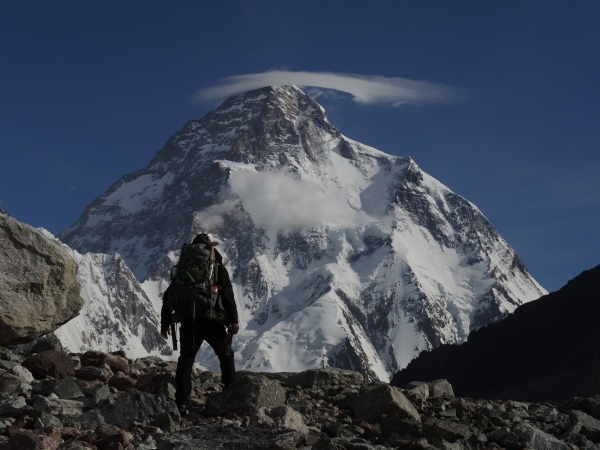 At 8,865m in elevation, K2, located in the Karakorum mountains on the border of Pakistan and China, is less than 200m smaller than Mt Everest but in every other sense is the ‘King of the Mountains’, widely regarded as the greatest challenge in mountaineering on Earth.  Only 330 climbers had reached its icy summit prior to 2013, compared to 4,093 for Everest in the same period, with a very low success rate of those who had attempted.

Between June-August 2013, Mr Hayes made his first assault on the mountain as one of 20 foreign climbers attempting its summit.  The expedition hit problems from the start and ended in tragedy when a major avalanche struck much of the team.  Notwithstanding this, Mr Hayes went to Pakistan a year later and, after 7 weeks on the mountain, summited K2 on 26 July 2014.  In the lecture, he explores the human dynamics, decision-making, emotional strain and gut instinct involved in his two expeditions on the mountain.

Adrian Hayes hails from the United Kingdom and served as Gurkha Officer in the British Army. Following this, he became Middle East Sales Director for Airbus.  He has since become a record-breaking polar explorer, mountaineer & adventurer.  In his expedition career he has climbed Mt Everest and K2, reached the North Pole and South Pole on foot, travelled the length of Greenland by kite-ski, crossed the Arabian Desert by camel, winning two Guinness world records.  As one of the few extreme adventurers in the world with a senior corporate background, he is now an internationally popular keynote speaker.  His first book ‘Footsteps of Thesiger’ was published in 2013.  Mr Hayes has featured in two television documentaries: the 2011 National Geographic Channel ‘Greenland Quest’ and the 2013 Discovery Channel ‘Footsteps of Thesiger’.