The Royal Geographical Society is pleased to welcome Kenton Cool to Hong Kong to speak on “The Everest Triple Crown: One Man’s Everest”.  Kenton Cool has climbed Mt Everest 12 times, including twice as the leader of Sir Ranulph Fiennes’s Everest expeditions.  In this talk, he tells the story of how, during 2013, he became the first man to climb the three peaks that make up the “Everest Horseshoe”, Mt Everest, Mt Lhotse and Mt Nuptse, all on one foray from base camp.  This feat had previously been considered impossible.  He also speaks about his extraordinary career as a mountaineer, including 21 successful expeditions to the Greater Ranges. 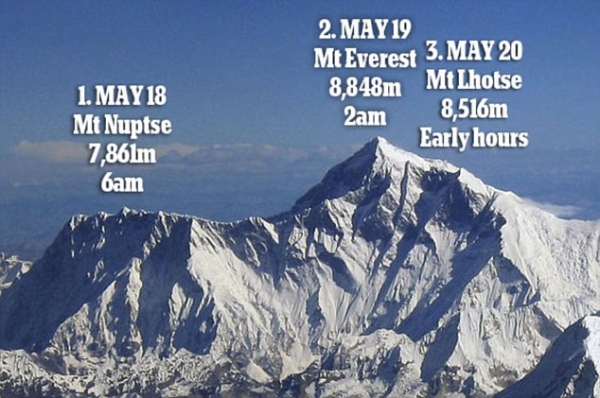 In 2013, the 60th Anniversary of the first ascent of Mt Everest, Mr Cool embarked on an adventure that was to make Everest history.  No one had ever managed to climb Mt Everest at 8,848m, Mt Lhotse at 8,516m, the world’s fourth highest, and Mt Nuptse 7,861m, the world’s 19th highest, on one foray.  Mr Cool sought not only to climb all three in a season, but to climb them in a “single push”, leaving basecamp and continually keeping moving for all three accents.

The adventure started with Mt Nuptse which, although the lowest of the three mountains, is technically the hardest to climb.  His team made a seamless ascent until the last 200 metres, from which point a combination of terrain and weather took the team to the limits of physical and mental endurance.  They recovered to climb Mt Everest, then with the goal within grasp, Mr Cool, perched high on the slopes of Mt Lhotse, faced an unexpected extreme obstacle which led to a fight that superseded climbing all three mountains.  Describing this feat, he gives insights into the decision-making, risk mitigation, adapting to change and team building involved in completing the expedition.

Mr Cool also describes how in 2012, to celebrate the London Olympics, he fulfilled an Olympic Games pledge, by taking an Olympic Gold medal awarded at the 1924 Winter Olympics to the summit of Mt Everest.  The medal had been awarded to members of the British Mt Everest Expedition 1922, a Royal Geographical Society-run and funded feat of valour, on which the first climbers climbed over 8,000m or 27,000ft leading to the only Olympic Gold Medal ever to be awarded for a non-Olympic sport.  In 2011, Mr Cool also became the focus of the world’s media after proving that 3G was now accessible on the summit of Mount Everest.  He then went on to enter the record books for sending the first and only Tweet from the summit.

Kenton Cool hails from the United Kingdom and read Geological Sciences at the University of Leeds.  He started climbing full-time on graduation and became a member of the British Association of Mountain Guides.  When not leading expeditions or climbing he resides in the French Alps and Gloucestershire in the United Kingdom.  Mr Cool is one of the world’s leading alpine climbers and mountain leaders, with many incredible feats of human achievement.  With 12 Everest Summits, he is Britain’s most successful Everest mountaineer, the second most successful Western mountaineer of all time on Mt Everest and claimed the historic three peaks record during Mt Everest’s 60th anniversary year.