Vanishing Kings of the Desert

The Royal Geographical Society is pleased to welcome Dr Philip “Flip” Stander to speak on “Vanishing Kings of the Desert”.  In this lecture, Dr Stander, the maker of the famous nature film Vanishing Kings, talks about his 15 years studying the lions of Namibia, especially the unique desert-adapted lion.  For this period, he has spent up to four months at a time entirely alone in the Namib Desert.  He has rescued these inimitable lions of the Kunene region from just 20 to an estimated 130 today.  These unique lions walk massive distances in order to increase the likelihood of finding food, as prey species are few and far between in this desert habitat.  Rarely drinking water, the lions keep hydrated through the food they consume, an adaptation that is vital to their survival in the harsh desert. 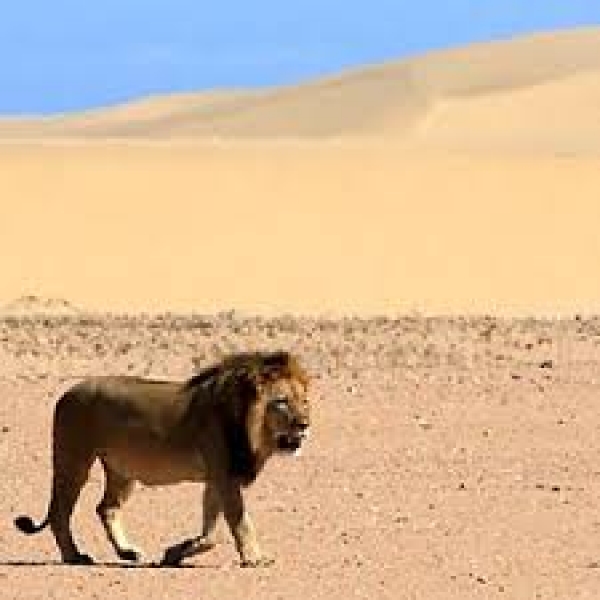 The talk aims to put the landmark film into the context of the uniqueness of the desert-adapted lions of Namibia.  Dr Stander also talks of the long-term research efforts to conserve their population, and the importance of tourism in the future of the species, as well as for most other wildlife species in the region.  Dr Stander’s talk is rich with short video clips illustrating the film.

Desert-adapted lions are huge and honey colored, with amber eyes, but reside in the sands of the desert.  Dr Stander has been able to collar electronically many of them, which is an essential part of his research.  The more he is able understands the better equipped he is to implement strategies to help local tribes to co-exist with them.  He also uses the collars to inform guides of their location and alert villages to their approach, if necessary.

He also speaks briefly about how he has developed monitoring systems for large carnivore populations, such as leopard and cheetah around Namibia to support sustainable utilisation.  He has also launched a nation-wide carnivore monitoring system, the Large Carnivore Atlas, and produced the first scientifically based distribution maps for the six large carnivores of Namibia.

Dr Philip Stander hails from Namibia and has been involved with wildlife from an early age.  He worked as a ranger in Etosha National Park where he developed an interest in science and especially the behaviour and ecology of large carnivores.  During a study in Etosha, Dr Stander discovered that lions hunt prey using an advanced level of coordinated co-operation, with individual lions repeatedly occupying the same position in the hunting formation.  This discovery was new to science and was widely published, leading to the offer of a research fellowship at Cornell University, USA.  He then moved to Cambridge University, United Kingdom, where he read for his M.Phil and PhD degrees.  His PhD thesis was awarded the Huxley Award by the London Zoological Society.  Over a 36-year period, he has conducted studies on all six large carnivore species in Namibia and published 30 scientific articles.  He speaks regularly around the globe on the Desert Lions.

Members of the RGS and their guests are most welcome to attend this event, which is HK$150 for RGS Members and HK$200 for guests and others, including a complimentary glass of wine or cocktail.

The Royal Geographical Society - Hong Kong wishes to express its thanks to Wilderness Safaris for its generous assistance with this event.