Cycling to Every Country in Africa: Getting to the Rugby World Cup the Long Way

The Royal Geographical Society and the Hong Kong Club are pleased to welcome Ron Rutland to speak on “Cycling to Every Country in Africa: Getting to the Rugby World Cup the Long Way”.  On 30 June 2013, after selling everything he owned, alone and unaided, Ron Rutland set out from Cape Town, South Africa, to embark on a world first, so make a continuous journey through every country in Africa.  His objective was to get to England in time for the 2015 Rugby World Cup.  With 42,000km of peddling over 841 days, and via over 70 countries, he made it to Brighton to watch the Springboks play Japan. 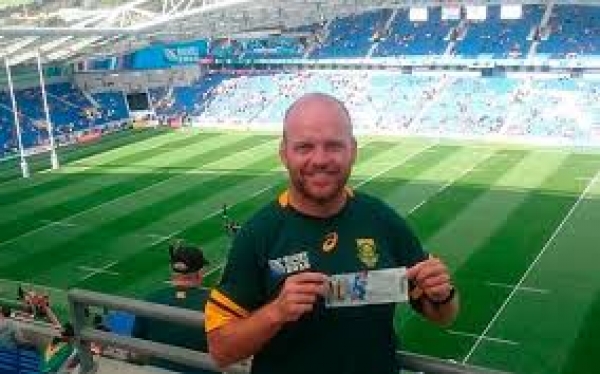 In his uniquely humorous manner, Ron Rutland has inspired audiences around the world with his tales from his extraordinary trip around Africa.  He shows how he crossed some of the most inhospitable environments on the Planet.  These include days cycling up the flood plains of the Zambezi in Western Zambia, over the Highlands of Ethiopia, through the deserts of Djibouti, together with the stunning beauty of the Golden Gate National Park in the Free State.

He also talks of the bike-wrenching clays of tropical rainforests of Central Africa and pushing his bike for days on end through ankle deep sand in western Mozambique, when he has running out of water at the same time.  He also had to drag his bike through the impenetrable ancient rainforest in Uganda as well as the tropical rainforests of the Congo.  It also took five weeks to cross the desert of Sudan and Chad in 45°C temperatures and furnace-like winds.  On the bike, because he was going so slowly, he was interacting with people all along the way leading to many amusing incidents.  By being on a bicycle, he was also completely vulnerable, so relied on the extraordinary humanity and hospitality of Africans to look after him.

Members of the Hong Kong Club and RGS, and their guests, are most welcome to attend this event, which is HK$200 including complimentary drinks.