The Royal Geographical Society is pleased to welcome Jules Lewis to speak on "Bhutan: Moving Mountains”.  In this lecture, Ms Lewis speaks on this fascinating mountain “Shangri-La”, including the geography, culture and history of this beautiful country.  Bhutan is a place that even seasoned travellers consider a privilege to visit, yet very few make it to Druk Yul, the land of the Thunder Dragon and Happiness.  In the eastern end of the Himalayas, this tiny land locked country-bordering China and India is slowly opening her magic, mystery and wisdom to the World. 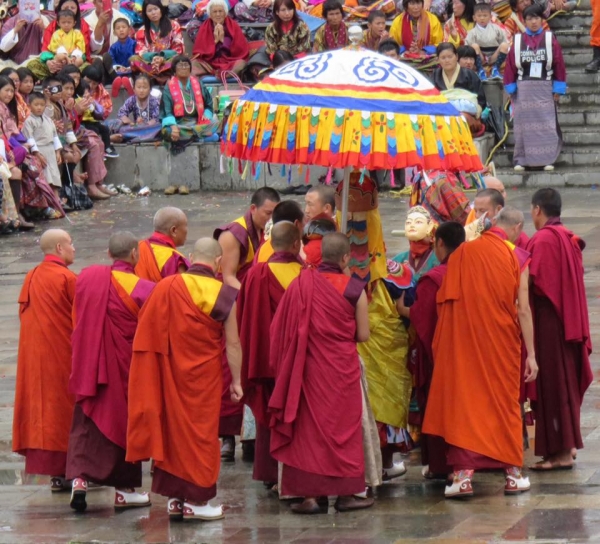 Bhutan has a stunning and wide variety of flora and fauna, amazing architecture, ancient traditions, sacred monasteries, fluttering prayer flags, a deeply revered King, remarkably friendly people, staggering natural beauty and a colourful unique culture.  Bhutan remains unspoiled by mass tourism yet times are changing: mountains are moving and Bhutan is slowly opening up to the modern world, expressed in men with a horses’ bridle in one hand and a mobile phone in the other and with Buddhist monks in their red robes behind a computer, after having performed deeply touching rituals.

Highlights of the country include a hike up to the Tigers Nest, hiking the Druk Path from Paro to Thimphu, meditating with monks, planting juniper trees, attending the Thimphu Festival, meeting with Namgay Phurba the renowned Thankgha artist, visiting the National Chorten and Buddhas, but most of all the stunning views, monasteries and culture.

This lecture gives a colourful and practical introduction to the country, illustrated with many beautiful photographs.  Ms Lewis introduces the kingdom's history, culture and ecology ranging from the towns to the remotest monasteries.  She tells of strange festivals including traditional archery, gives insights into the cultural and spiritual heritage, cultural sites, and information on the regions of the kingdom and its history and significance.

Buddhism is a natural way of life and the whole country breathes peace, tranquillity, enchantment, joy and age-old wisdom. It is also the country that introduced Gross National Happiness (GNH) to the world, as an alternative for the economical Gross National Product.  This inspired many other countries to look at happiness and development in a different, richer way.  As Bhutan increasingly engages with the global community, substantial efforts have been made to define and measure GNH.  The GNH concept has inspired a modern political happiness movement and in July 2011, the United Nations resolution 65/309 was adopted unanimously by the General Assembly placing “happiness” on the global development agenda.

After returning from Bhutan to her home base in the United Arab Emirates, Ms Lewis coined the phrase “The Bhutan Ripple Effect”, as she witnessed the impact the Buddhist Kingdom of Bhutan is having on the UAE.  In 2016, the UAE appointed a Minister of Happiness, Youth and Tolerance and 2017 has been announced as the “Year of Giving”.   In this lively presentation, Ms Lewis shares pictures and stories from her  times in Bhutan and taps into the concept of Happiness through nature, travel and answering the call to exploration.

Jules Lewis is a British adventurer, speaker and author of “Moving Mountains”, based in the United Arab Emirates.  She established “Mountain High” in 2002 and since this time has lead 58 expeditions to more than 20 countries, including the Arctic and Antarctica.  Her most recent trip to Bhutan was called the Jewels of Bhutan, with a team made up of nine different nationalities ranging from 22 - 62 years of age.  She has climbed several high altitude mountains including over 7,000m on Cho Oyu in Tibet.  Ms Lewis prefers to be immersed in nature, exploring new countries, connecting with new cultures and sharing her insights to the corporate and educational world.