The Royal Geographical Society is pleased to welcome Australian photographer Palani Mohan to speak on "Hunting with Eagles".  In this lecture, Mr Mohan tells of the wild mountains of western Mongolia, where temperatures drop to -40°C in winter and only the toughest survive.  Here he embarked on an ambitious project to document the amazing Altai Kazakh eagle hunters. 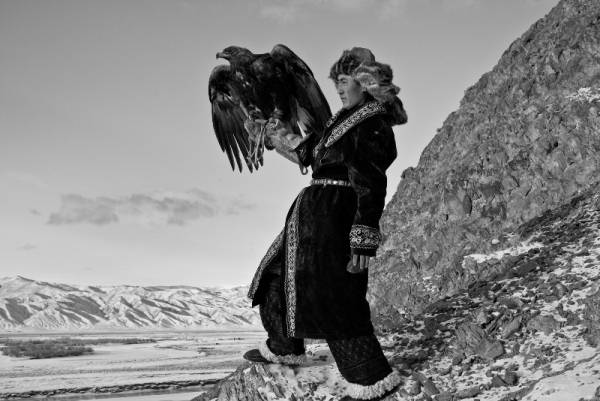 The Altai Kazakhs are unique in their hunting tradition.  The hunters trek up a mountain on horseback, holding golden eagles.  Then from the ridges, they wait and watch until prey is spotted, then the hunter charges towards it and the eagle swoops in for the kill.  In a project spanning five years, Mr Mohan visited these extraordinary and photogenic people, who he describes with admiration and vivid photography.  He tells a story of a beautiful yet brutal landscape, a strong and hardy breed of hunters and the remarkable bond they develop with their eagles.

The golden eagles that live in the high Altai Mountains, in far-western Mongolia, build their nests in the crags of the area’s rugged peaks.  Hunters belonging to traditional nomadic clans from the country’s Khazakh minority climb up to these crevices to capture the birds at around five months old, which is young enough to be pliable to human company and training to hunt.  Sometimes, the hunters catch eagles of about 5 years, which are already accomplished hunters but need to get accustomed to human company.  The eagles are domesticated, fed by hand and live with the hunters’ families for years.  Then, 10 or 15 years’ later, the hunters let them back into the wild to breed.

To hunt, the men take their eagles high into the mountains so that they can scan the valleys below for foxes and other animals, which the eagles fly down to catch.  Only female birds are used, because they are larger, with an eight-foot wingspan, and are fiercer hunters.  In the lecture, Mr Mohan’s photos vividly illustrate the rugged, rocky landscape, the men’s fabulous fur coats and hats, the birds look dinosaur-like wild eyes, and the eagles sitting calmly and alert on the hunters’ arms during a hunt.

Palani Mohan is an award-winning freelance photographer based in Hong Kong.  In 1985, he won a cadetship with the Sydney Morning Herald newspaper and spent the next 10 years as a staff photographer covering news and sports.  His work has been published by many of the world’s leading publications including National Geographic, Stern Magazine and Time Magazine. He is the author of five books, including on the Eagle Hunters of Mongolia, which was published in September 2015.  His work is part of the collection of the National Portrait Gallery in London and his images have been shown widely around the globe including at the prestigious Visa Pour L’Image in Perpignan, France.  Mr Mohan has won awards from the World Press Foundation, Pictures of the Year International and the International Olympic Committee.

The Royal Geographical Society - Hong Kong wishes to express its thanks to Macquarie Securities for its generous assistance with this event.