Follow the Frontier: A 1,000 mile walk along the USA-Mexico Border, where President Trump has now promised to build a Wall

Tom Fremantle
Thursday, 23 Feb 2017
Google Calendar Outlook Calendar
Drinks Reception 6.30 pm; Lecture 7.30 pm
1/F, Hong Kong Club, 1 Jackson Road, Central
Please note that we are requesting pre-booking; please click here or reply to This email address is being protected from spambots. You need JavaScript enabled to view it. stating the number of attendees who wish to book for the event. Please also note that no denim, T-shirts or sportswear are permitted at the HK Club

The Royal Geographical Society is delighted to welcome again Tom Fremantle, on this occasion to speak on "Follow the Frontier: A 1,000 mile walk along the USA-Mexico Border, where President Trump has now promised to build a Wall".  In this lecture, well-known adventurer Tom Fremantle discusses his extraordinary 50-day trek along the wild US-Mexico border with his street dog, Pancho. 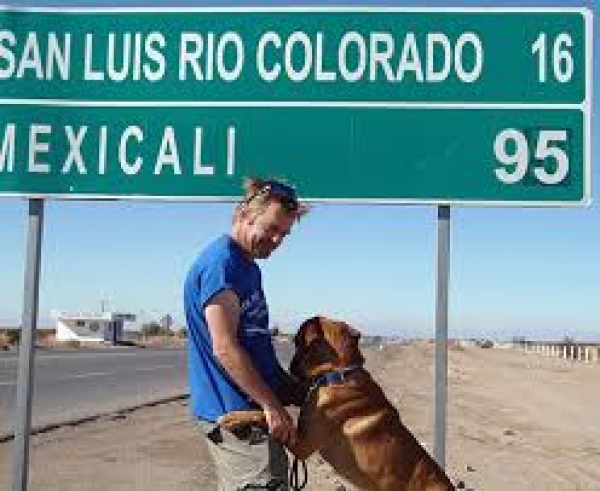 They zigzagged over a 1,000 miles between the two countries from Ciudad Juarez, then dubbed 'the world's most dangerous city', on the fringes of Mexico's Chihuahua Desert, to breezy prosperous San Diego on the Pacific Coast.  En route, they met with everyone from farmers, migrant workers, border patrol officers, gun-wielding narcos to a former drug-fuelled gangster turned street preacher, crossing every imaginable environment.

Mr Fremantle discusses what first led him to the now hotly topical US-Mexico border, where contraband and illegal immigrants cross regularly.  He also draws on other writers who have travelled with animals, including John Steinbeck, Dervla Murphy and Robert Louis Stevenson.  He also discusses briefly how in 2010, when Tom arrived in Juárez, the city suffered over 3,000 gangland killings but is now a city transformed, having bounced back against all the odds and the stories of some of the indomitable border dwellers who stood up to the violence and corruption.

Tom Fremantle is a writer, public speaker and adventurer, who resides in Oxford, United Kingdom.  His first major trip was a bicycle ride between Swanbourne, England and Swanborne, Australia.  The two-wheeled odyssey, which took 17 months, piled through 24 countries and over 12,500 miles, was captured in Johnny Ginger's Last Ride.  Following publication of The Moonshine Mule, an instant bestseller, in 2004 he canoed down the Niger.  His extensive journey through West Africa plied through a landscape of exceptional variety, from bleak, pale deserts peppered with scrub, to become The Road to Timbuktu.  His journalistic career started in the UK and then at Hong Kong and his work has appeared in The Independent, The Mail on Sunday and the South China Morning Post.  His latest publication, Pancho's Song, was published during 2 016, set on the US-Mexican border.

Members of the Hong Kong Club and RGS, and their guests, are most welcome to attend this event, which is HK$200 including complimentary drinks.