The Royal Geographical Society is pleased to welcome Pierre Constant again to Hong Kong, to speak on "New Extraordinary Wildlife in Madagascar: Diving into unknown Madagascan Caves”.  In this lecture, he discusses the extraordinary biosphere of Madagascar, one of the world’s treasure houses of biodiversity, where in previously unknown caves he has found amazing new species.  Famous for its stunning lemurs and chameleons, Madagascar hosts one of the planet’s most unique animal assemblages, with more than 80% of the islands species endemic. 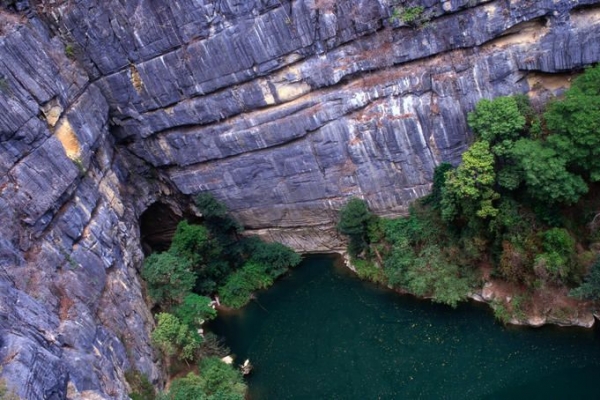 However, hidden within the karst landscapes of Madagascar, there are also thousands of kilometres of caves, the most extensive system in Africa.   As a world-famous cave diver and underwater photographer, Mr Constant has been exploring the freshwater caves of southern Madagascar for the last 5 years.

Here, venturing into the unchartered territory of the arid bush, he has found some amazing discoveries involving new astounding rare animal species and extinct animal species.  He has also found breath-taking subterranean environments formed during the Eocene period, approximately 50 million years’ ago.  He also speaks about his schedule for further exploration, each time leading further into dangerous territory underground in the quest for further new finds.

Pierre Constant hails from France and has degrees in Biology and Geology.  He has been organising and leading expeditions around the world for more than three decades, principally to Asia, Africa, the Galapagos Islands and the western Pacific.  In 1980, he went to Ecuador to work as a naturalist guide around the Galapagos Islands.  Mr Constant spent the next two years residing on the islands, participating in the first training course for the Galapagos Natural Park Service.  He published "L'Archipel des Galapagos" and has since lead annual expeditions on the Galapagos.

Mr Constant has been visiting Madagascar regularly for the last 25 years, on which he is an acknowledged expert.  He is also an expert on Papua New Guinea, which he has visited some 20 times, leading various expeditions, including shooting three television programmes for French television.  He is the author of "Admiralty Islands: Lost world of the Titans".  Mr Constant is also a photojournalist, who has published 150 articles worldwide.  He resides between Paris, Madagascar and the Galapagos Islands, when not exploring the rest of the planet.