The Royal Geographical Society is delighted to welcome Dr Katrina Nakamura to speak on “Modern Slavery in the Illicit Seafood Industry: The Labour Safe Screen”.  In this lecture, Dr Nakamura describes the huge issue of modern slavery in the world at present.  She focuses on the substantial problems of human trafficking in the illicit seafood industry.  She then shows how food companies can help to protect forced labour by screening to uncover risk at the base of the supply chain. 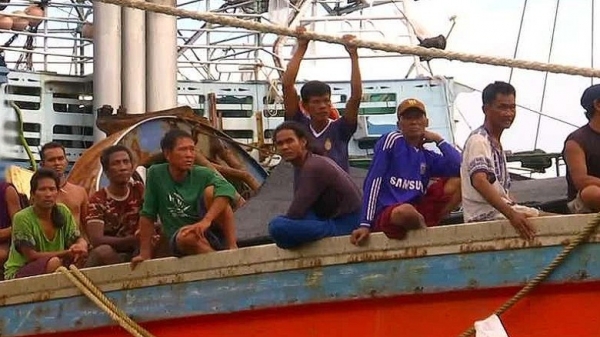 Goods produced with forced labour at the base of the supply chain often make their way into the global economy.  The International Labour Organisation defines forced labour as “work or service exacted from any person under the menace of penalty and for which the person has not offered himself voluntarily”.  At the base of seafood supply chains, regulatory weaknesses are widespread because most originate in the waters of the developing countries, which provide 65-70% of global exports.  Authorities say fish and shrimp goods are made with a significant incidence of forced labour in Indonesia, Ghana, Thailand and Myanmar, while forced child labour incidence in seafood production is high in Thailand, Ghana and Bangladesh.

Food sellers are becoming liable for forced labour found anywhere in the supply chain under laws like the “United Kingdom Modern Slavery Act 2015” and revised trade enforcement procedures in the United States of 2016.  Food companies procuring seafood from long fragmented supply chains find ethical sourcing to be a major challenge, however, and cannot yet guarantee that the ethical requirements in their buying policies are met.

Dr Nakamura gathered an interdisciplinary team to develop a solution for food companies to protect fishing crew from modern day slavery, backed by Humanity United and the Freedom Fund.  The team hypothesised that labour abuse hotpots can be identified by utilising evidence from the human rights sphere combined with supply chain tracking technology.  The Labour Safe Screen utilises a triangulation approach to investigations, which is designed to identify working conditions and labour violation risks across supply chains.  Some 120 shrimp, tuna and other seafood products were screened for 18 participating companies with verifiable, public data sources, combined with first-hand intelligence from producers and suppliers to identify points and levels of workplace risk.  Today, grocers can screen products continuously with food traceability software with an automated version, the Labour Safe Digital Certificate, which won the Grand Prize in President Obama’s Partnership for Freedom innovation challenge.

Dr Katrina Nakamura hails from Canada, where she read Geography at McGill University and received her doctorate from the University of British Columbia.  She has worked in seafood sustainability for 20 years, starting with wild salmon gillnetters in the Pacific Northwest, near Alaska, and co-founding the Quality Fishing Expo in 1998.  As a scientist and entrepreneur, she has contributed to the running of new commercial fisheries and co-management institutions and to help seafood supply chains produce more sustainable products.  With support from Humanity United, she led the development of the Labour Safe Screen to help seafood businesses to tackle forced and trafficked labour in supply chains.