The Royal Geographical Society is pleased to welcome Thomas Bird and Harvey Thomlinson to speak on “Luoyang: In Search of China’s Ancient Capital”. In this lecture, Messrs Bird and Thomlinson tell of their discoveries in the fantastic historic city of Luoyang in Henan Province, which was once the capital of 13 dynasties and 97 emperors. In Luoyang, they retrace Chinese history across the millennia from Confucius and Laozi, to Tang poets Li Bai and Baiyu Ji, as well as China’s only empress, Wu Zetian. 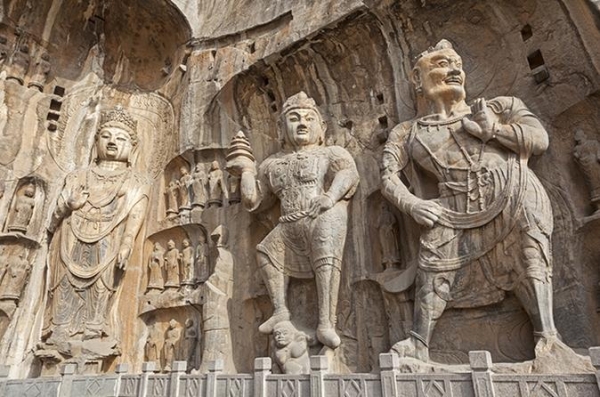 Now a prefectural city and with reduced access to resources, Luoyang’s legacy as the centre of the ancient Chinese world has been mostly forgotten. Despite this, Messrs Bird and Thomlinson describe the stunning lost treasures only discovered in recent years which illuminate the beginnings of Chinese culture. They describe Luoyang’s past as China’s ancient capital from the Xia dynasty (2070-1600 BC) through the glories of the Han and the Tang dynasties.  Not only do the artistic gems of the Longmen Grottoes, that are the sublime summit of Chinese rock sculpture, capture historians and archaeologists alike, but as the foundation of Heluo civilisation, Luoyang’s treasures go far deeper.

Thomas Bird and Harvey Thomlinson reveal imperial tombs, buried palaces and share Luoyang’s legacy as a landing point for Buddhism in China, which is commemorated by White Horse Temple, the country’s earliest Buddhist temple. In this talk, they also explore the recent excavations in the nearby Yanshi County, the Lijing Gate and Empress Wu Zetian’s tallest constructed palace. These further demonstrate Luoyang’s unparalleled heritage as a cradle of Chinese civilisation.

While uncovering the ancient heritage sites of Luoyang, Messrs Bird and Thomlinson bring to light the marks left by emperors, soldiers, artists, monks and common citizens over 2,500 years ago. The city is named after its position on the north or sunny (“yang”) side of the Luo River. It acts as one of the geographical centres of China at the intersection of the Luo and Yi Rivers, attracting numerous significant individuals across the millennia.  Luoyang’s museums and ancient sites are an inspiring starting point for explorations of classical Chinese culture from calligraphy to cosmology and poetry to philosophy.

Thomas Bird is a writer and photographer based in China. He holds a Master’s Degree in Chinese Studies from SOAS, University of London and has worked at various publishing and media outlets. His writing can be seen in Lonely Planet Online, DestinAsian, CNN Travel, Post Magazine, 48 Hours, Geographical Magazine, City Weekend, Selvedges, Macau Closer, Rough Guides and many other international publications. He has contributed to several guidebooks including Dunhuang: A City on the Silk Road and Kunshan on the Water Margin. Mr Bird has published short stories in the literary journals Fever Dreams and Meltingplot. He is the co-writer of the guidebook Luoyang: Ancient Capital – The Guide.

Harvey Thomlinson is a graduate of Oxford University and a long-time sinologist who has translated two novels by contemporary Chinese novelist Murong, Leave Me Alone and Dancing Through Red Dust.  He is the founder of Hong Kong-based Make-Do Publishing, which specialises in Chinese and East Asian literature and publishes the imprint Meet China Guides, of which Thomas Bird is the key travel writer for several of the titles. Meet China Guides published Luoyang: Ancient Capital this year and Mr Thomlinson also wrote a number of chapters in the book.

Members of the RGS, their guests and others are most welcome to attend this event, which is HK$150 for RGS Members and HK$200 for guests and others, , including a  complimentary glass of white or red wine.
The Royal Geographical Society - Hong Kong wishes to express its thanks to JLL for its generous assistance with this lecture.