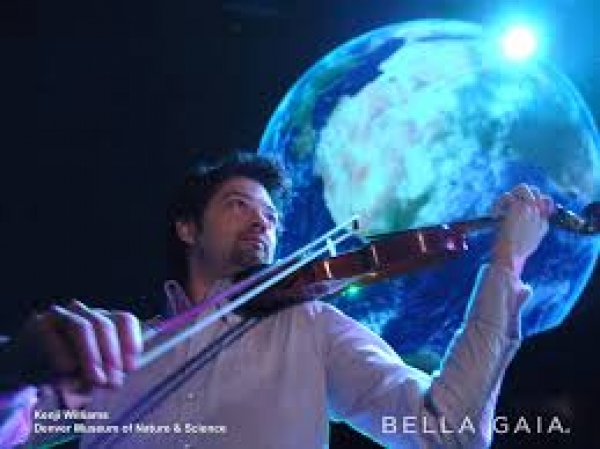 Bella Gaia is a moving multimedia presentation as seen through the eyes of astronauts in space flight.  The show inspires appreciation of the Earth and brings to attention the impact of human activity on the Earth’s eco-systems.  Produced by award winning director and violinist Kenji Williams, Bella Gaia features a violin performance by Mr Williams himself on stage in front of the screen.

Bella Gaia successfully simulates space flight, and uses onstage musical performance, large-scale projected NASA scientific visualisations, technology and a thought-provoking stream of crucial scientific data and cultural imagery to showcase the amazing art and cultural heritage of civilizations inhabiting the Earth.  A “Living Atlas” journey of our planet, Bella Gaia incorporates satellite imagery of Earth, timelines and data to elucidate the impact on the planet of everything from climate change to air traffic.

Using sophisticated scientific visualisations powered by NASA film, it additionally features issues from Amazon basin deforestation to time-lapse images of the movement of Arctic ice, demonstrating the science behind what makes the Earth habitable, and the increasing imbalance caused in part by human activity.  The vision of Bella Gaia is to bring the power of art, technology, space science, scientific data and visualisations together, into a context that is both entertaining and educational, with the goal of increasing the awareness and appreciation of the Earth.

Kenji Williams is an award-winning filmmaker, electronic music producer, theatrical show director and classically-trained violinist.  Of his several shows and albums, Bella Gaia is now considered his masterpiece, and has been acclaimed at performances including at the Smithsonian in Washington, the NASA festival, the Copenhagen Climate Change Summit, at the largest open-air performing arts festival in the world at Glastonbury in England and at sold-out shows worldwide.  Bella Gaia has been performed to audiences from Europe to the USA and Asia, and has proved to engage all from children to heads of government.  Kenji Williams has published six music albums, directed 15 films and music videos and written three multimedia theatrical shows and is widely respected for pioneering the convergence of art and science.

Members and their guests are most welcome to attend this event, which is HK$200 for Members and HK$300 for guests and others.