The Last Animals is a story about an extraordinary group of people who go to all lengths to save the planet's last animals. The documentary follows the conservationists, scientists and activists battling against the poachers and criminal networks to protect elephants and rhinos from extinction. 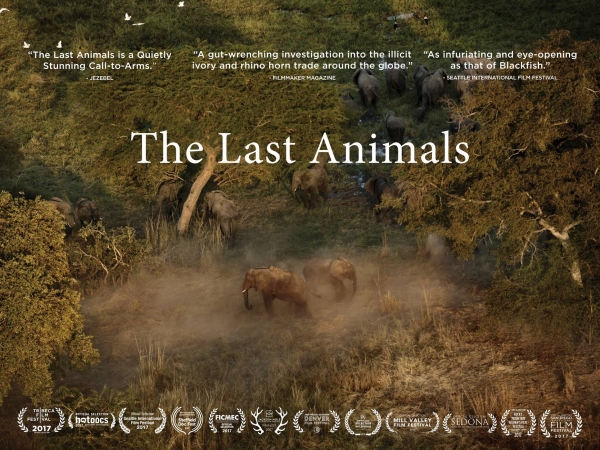 From Africa's front lines to behind the scenes of Asian markets, the film takes an intense look at the global response to this slaughter and the desperate measures to rescue genetically the Northern White rhinos who are on the edge of extinction.

Kate Brooks
Kate Brooks is an American photojournalist who has chronicled conflict and human rights issues for nearly two decades. She began her career in Russia at the age of 20 while documenting child abuse in state orphanages. The resulting photographs were published worldwide and used by the Human Rights Watch to campaign for orphans’ rights.

Following “9/11” events, Ms Brooks moved to Pakistan to photograph the impact of U.S. foreign policy and spent the next 10 years covering conflict across the Middle East.  She has been the recipient of numerous international awards, and her photographs are regularly published in American and European magazines and have been exhibited in galleries and museums.  Her introspective collection of essays and photographs, “In the Light of Darkness: A Photographer’s Journey After 9/11”, was selected as one of the best photography books of 2011.

Ms Brooks’s passion for filmmaking was sparked from working as a contributing cinematographer in Afghanistan on the film The Boxing Girls of Kabul. The film won the Inspirit Foundation Pluralism Prize at HotDocs and a Canadian Screen Award.  In 2012-13, she was awarded a Fellowship at the University of Michigan. There she researched the pan African poaching epidemic before embarking on directing The Last Animals.

The Royal Geographical Society - Hong Kong wishes to express its thanks to UBS for its generous assistance with this lecture.