The Human Conquest of the Earth and the Oceans 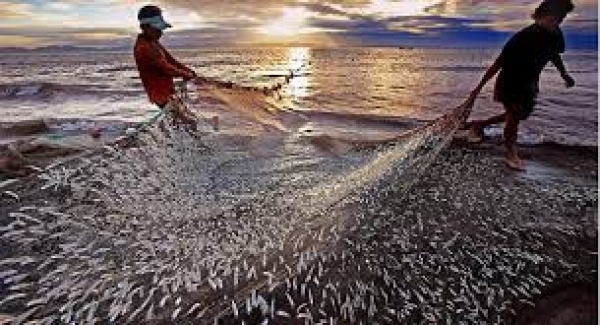 Modern humans, who emerged in Africa about 200,000 years ago, were hunter-gatherers who also exploited aquatic and coastal resources.  Some of them left Africa about 70,000 years ago to become ancestors of the peoples of Europe, the Americas, Asia and Australia.

The Agricultural Revolution became a more distributed affair with foci in Africa (millet), the Americas (maize in Mexico, potatoes in Peru), East Asia (rice) and the Middle East and then Europe (wheat).  However, agriculture had a devastating impact on soils, now a declining resource.

Moving to Oceans, he illustrates how the Industrial Revolution brought mass fishing, which led to steel-hulled trawlers with which marine fish resources could be exploited at a rate previously unthinkable and incompatible with the regenerating capacity of the oceans. This resulted in a widespread decline of resource abundance and hence a decline in the profitability of fishing.

The fishing industry’s response to this double challenge was to expand geographically, to obtain more subsidies from their governments and, in too many cases, to increase reliance on underpaid and slave labour. Strategies to counter these developments include rebuilding fish populations around in the countries with distant-water fisheries, reducing and eventually abolishing subsidies, increasing the enforcement of fisheries regulation, notably via satellite monitoring, and setting up large marine reserves, including closing the high seas to fishing.

Professor Daniel Pauly is University Killam Professor at the University of British Columbia in Vancouver, Canada.  He studied fisheries science in Germany and has spent much of his career working and studying in the tropics.  Since 1999, he is the Principal Investigator of the Sea Around Us, a research initiative devoted to documenting and developing policies for mitigating the impact of fisheries on the world’s marine ecosystems.  The concepts, methods and software he developed are presented in over 1,000 widely-cited publications, and have led to his receiving multiple awards.  He is a Chevalier de la Légion D’Honneur of France and is the author of several books, including Darwin's Fishes, Five Easy Pieces and Gasping Fish and Panting Squids.

Members of the RGS, their guests and others are most welcome to attend this event, which is HK$150 for RGS Members and HK$200 for their guests.