The form #29 does not exist or it is not published.

Film Screening "Education Explorers in India" 3,000 km across India in a Rickshaw with an Introduction and Q&A 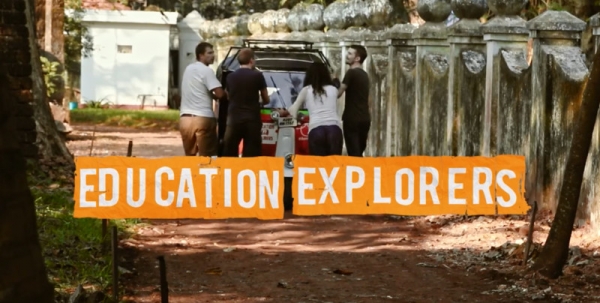 In India, more than 3 million girls are out of school.  In this real life documentary, five adventurers set out to get a deeper understanding of the situation by crossing the country in the most unsuitable vehicle. They drive a motor rickshaw 3000 km from south to north to explore the education landscape of the subcontinent.

Along the way, they encounter drama, make unexpected friendships and learn about the challenges that girls face.

Tom Boarder was born in the UK and brought up in Australia.  He was educated at Deakin University.  He moved to Hong Kong from Melbourne in 2011 and works in the corporate and commercial production industry, particularly for videos.  His passion lies in documentary and animated info-piece films, with interest also in casual photography and culture.

Paul Niel is a Hong Kong based mountaineer and adventurer, who graduated from the University of Vienna.  He has travelled the globe for expeditions and other adventures that have taken him to places as disparate as Kamchatka, Papua, the Arctic Circle and across the Atlantic Ocean in a sailing yacht.  Over the last 10 years, he has successfully climbed the highest mountains on every continent, the celebrated “7 Summits”, became one of just a handful of climbers to climb two 8,000 m peaks on the same day, Mt Everest and Mt Lhotse, and achieved several first ascents in Antarctica.  He has travelled to more than 90 countries and sailed across the Atlantic.  Together with his wife, he completed the first continuous “circum-climb” of Hong Kong Island along its coastline to map water quality pollution.  He works with Nepal based charity dZi and Indian charity Educate Girls and is a frequent keynote speaker and contributor to Action Asia Magazine and the South China Morning Post.