The form #83 does not exist or it is not published. 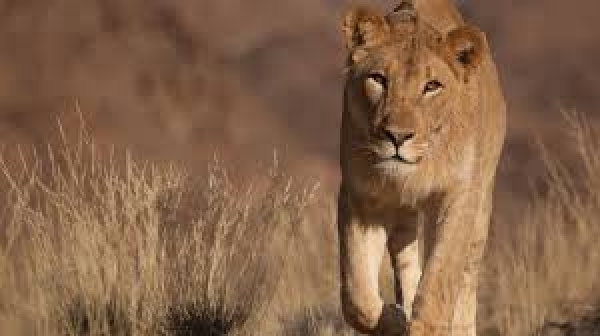 Dr Stander, desert lion conservationist, introduces the documentary, speaking on his own involvement with the lions shown in the film and reflects on the work that was involved in filming the animals, which live on a nocturnal rhythm.  He speaks of the over 15 years he spent studying desert lions, a time during which he spent up to four months at a time entirely alone in the Namib desert.  Ms Verwey then speaks on her research on desert hyaenas, focusing on her work in collecting data for the Brown Hyaena Project as well as the Desert Lion Project.

Vanishing Kings II – Desert Lion Legacy continues to tell the story of five lion cubs that were born to three lionesses in the Namib desert and describes the challenges they face, from finding sufficient prey to avoiding the dangers of rural villages.  The film tells of the legacy that the lioness who raised them left them and how it influences their behaviour, once they begin exploring the desert on their own.  In the documentary, Dr Stander explains how they thrive as the youngest pride of male lions ever in the Namib.

Dr Philip Stander hails from Namibia and has been involved with wildlife from an early age.  He worked as a ranger in Etosha National Park where he developed an interest in science and especially the behaviour and ecology of large carnivores.  During a study in Etosha, Dr Stander discovered that lions hunt prey using an advanced level of coordinated co-operation, with individual lions repeatedly occupying the same position in the hunting formation.  This discovery was new to science and was widely published, leading to the offer of a research fellowship at Cornell University, USA.  He then moved to Cambridge University, United Kingdom, where he read for his M.Phil and PhD degrees.  His PhD thesis was awarded the Huxley Award by the London Zoological Society.  Over a 36-year period, he has conducted studies on all six large carnivore species in Namibia and published 30 scientific articles.  He speaks regularly around the globe on the Desert Lions.

Emsie Verwey grew up in Swakopmund, Namibia, and was first exposed to wildlife conservation on family holidays to the Etosha National Park.  Her career in ecotourism began with Wilderness Safaris in 2003, when she ran the Desert Rhino Camp at the National Park.  Through her work with Wilderness Safaris she became involved with local conservation initiatives, such as Save the Rhino Trust and the Desert Lion Conservation Project.  She now primarily researches desert brown hyenas at the Hoanib Skeleton Coast Camp.  Ms Verwey plans to obtain a Master’s degree with her current brown hyaena habitat comparison study.

The Royal Geographical Society - Hong Kong wishes to express its thanks to UBS and Wilderness Safaris for its generous assistance with this lecture.