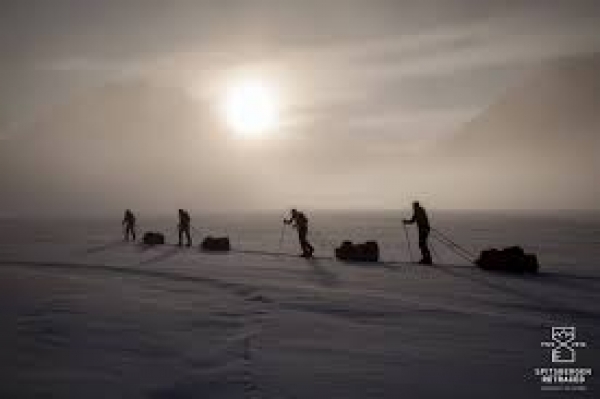 In 2017, four students also from Oxford University returned to the Arctic in their footsteps, to discover the secrets of the epic journey and to see first-hand the beauty of this pristine wilderness.   The expedition also retook the photographs taken almost 100 years previously to show how the landscape had changed, as well as conducting scientific research and repeating climbs done by the 1923 team.

The film “Spitsbergen Retraced” tells the story of this unsupported expedition across the ice as the team experiences arctic storms, stunning alpine ridges and historical treasures.

In the original expedition, four Oxford undergraduates had sailed to the High Arctic under the student leadership of George Binney, a student at Merton College, Oxford.  On 29 July, a sledging party landed on the East Spitsbergen ice cap with a view to making the first east-west crossing of the island.  Over the course of 30 days, they overcame terrible conditions to achieve a goal which had eluded all professional explorers until then.  They also made a detailed and impressive topographical survey of the unexplored interior.

The genesis of the 2017 ”Spitsbergen Retraced” expedition came from discovery of the original maps and photos from the 1923 expedition, found in the archives of Merton College, Oxford, and at the Royal Geographical Society.  After nine months of planning, fundraising and training for the expedition, including pulling sleds around Oxford for training, to the amazement of other students, the team achieved a resounding success.

James Lam was the leader of the expedition.  He was educated at Marlborough College, and at The Queen’s College, Oxford University, from which he has recently graduated.  He had climbed extensively around the UK, the Dolomites, the Alps and India by the time he went to Spitsbergen.  In 2015, he went on an expedition to Kyrgyzstan, making a number of first ascents on 4,000 and 5,000 metre peaks.  He has also trekked in Nepal, Tibet, Iceland and The Pyrenees.  He served as President of the Oxford University Mountaineering Club, President, Oxford Climate Society, is a Fellow of the RGS and has been elected a member of the Alpine Club.