Walking with Dinosaurs: A History of a Lost World 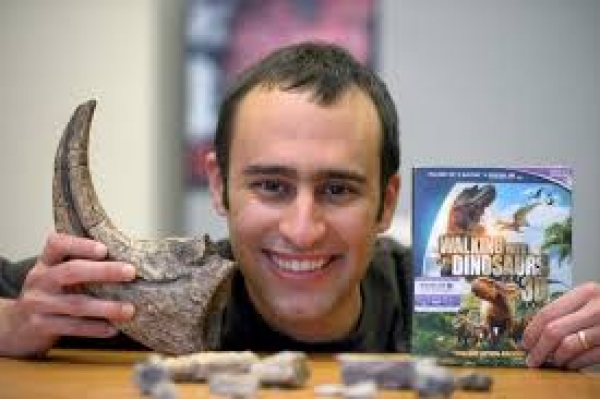 In a gripping talk, he brings the audience up to date with the latest thinking and theories on dinosaurs.  He also busts myths, such as that all dinosaurs were big, scaly, stupid brutes that just lumbered around.  He show that some, for instance, were nimble and elegant, and others had feathers and wings and could fly as birds.

Dinosaurs dominated between two great catastrophic events on Earth. The first took place about 250 million years ago at the end of the Permian period, when activity deep within the Earth’s mantle led to great outpourings of molten rock.  They grew to be remarkably successful.  Dr Brusatte talks of their downfall in similar circumstances.

He became famous through his books Dinosaurs and Dinosaur Paleobiology, which won him wide acclaim.  He then became the resident palaeontologist and scientific consultant for BBC Earth and 20th Century Fox's 2013 film Walking With Dinosaurs.

Dr Brusatte has authored several scientific papers as well as over 100 popular articles for magazines.  He has discovered more than a dozen new species, including a 95-million-year-old theropod.  He also found a complete skull more than five feet long, one of the biggest skulls of a carnivorous dinosaur and a giant, long-nosed, fish-like animal on the Isle of Skye in Scotland, rumoured to be the ancestor of the Loch Ness monster.   He is the author of numerous books including The Rise and Fall of the Dinosaurs: A New History of a Lost World, published in 2018.

The Royal Geographical Society - Hong Kong wishes to express its thanks to UBS for its generous support with this talk.