The Story of Hong Kong's Trees: the Art and Science

Sally Bunker and Professor Richard Saunders
Wednesday, 26 Jun 2019
Google Calendar Outlook Calendar
Complimentary Drinks Reception 6.30 pm; Talk 7.30 pm
The Haven, 29/F, Wyndham Place , 40-44 Wyndham Street, Central
Pre-payment is required. Please scroll down.
In this talk, the speakers talk of their new book Portraits of Trees of Hong Kong and Southern China, for which Sally Bunker painted numerous original tree paintings. Some of these stunning paintings are going to be displayed at the talk. 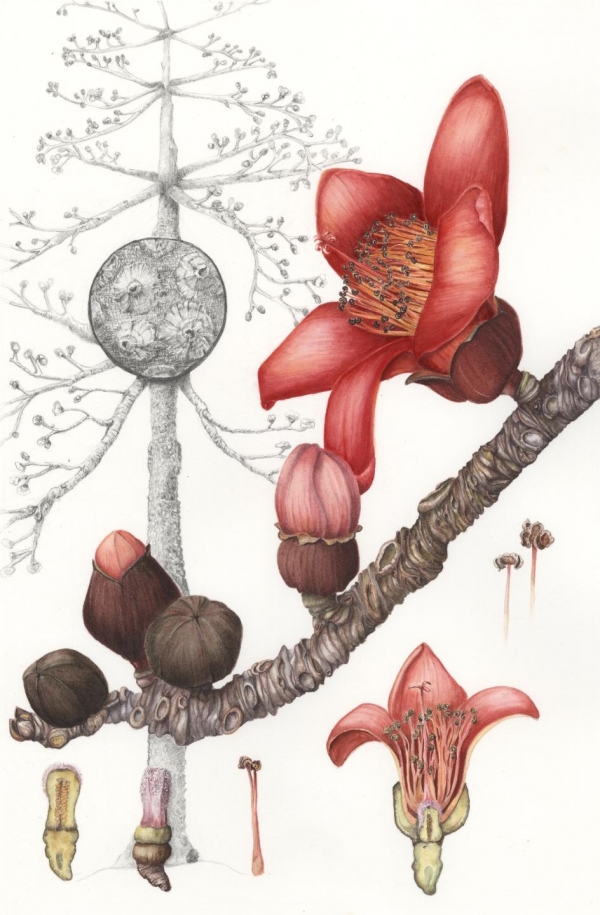 By way of introduction, Sally explains how she became a botanical artist and what it has involved, illustrated by her original sketch books.  Sally together with Professor Richard Saunders then discuss the rich tree diversity of Hong Kong and Southern China.  They then talk about four trees that are exhibited and explain some interesting details about them.

They begin with the Bauhinia, which was adopted as the floral emblem of Hong Kong in 1965 and subsequently became the emblem of the Hong Kong SAR.  This Hong Kong Orchid tree is an artificially propagated hybrid, sterile and reliant on artificial propagation.

They then talks about the Taiwan Acacia, which is not an original native of Hong Kong but is now regarded as such, and extensively cultivated throughout Southern China, doing well on poor soil.

The Red sandal wood tree is found in woods in Hong Kong.  This is a devious tree, as the seeds mimic fruits which are bright orange-red in colour, which the birds then mistake as being juicy fruits, a clever method of seed dispersal.

The Cotton Tree is often to be found in Hong Kong and the rest of Asia, with its very distinctive horizontally spreading branches, amazingly big bright red coloured flowers and copious cotton-like fibres bursting from its fruit capsule holding tiny seeds.


The Royal Geographical Society - Hong Kong wishes to express its thanks to Jacacda Travel as our Venue Sponsor for this talk.