James Owens and Ron Rutland
Tuesday, 20 Aug 2019
Google Calendar Outlook Calendar
Drinks Reception 6.30 pm; Talk 7.30 pm
2/F Chater House, 11 Connaught Road Central
Pre-payment is requested. Please scroll down.
Join James Owens and Ron Rutland as they cycle through Hong Kong on an epic 20,093 km journey from the UK to Japan, as they attempt to reach Tokyo just in time for the Rugby World Cup 2019. They are delivering the referee’s whistle to the opening match. 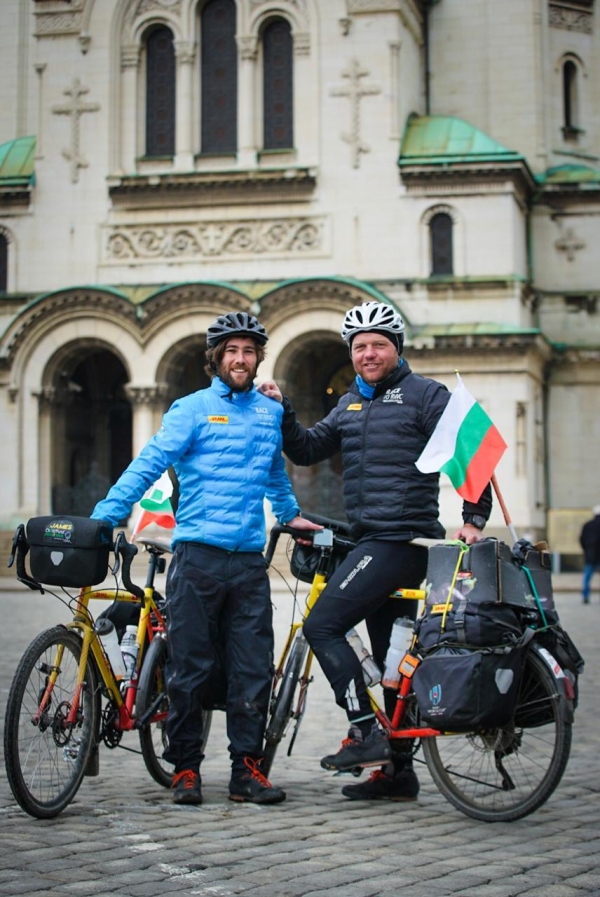 Overall, their expedition is spanning an amazing 231 days and 27 countries and territories.  They visit Hong Kong as the 26th stop on their journey, offering members a unique opportunity to hear about their extreme cycle ride on route. They have cycled through extreme weather from severely hot deserts to high mountains.

In this talk, James and Ron recount their journey across Europe and Asia, from cycling through the streets of Tehran to the Kuang Si Falls of Luang Prabang, as well as the physical, mental and cultural challenges they faced along the way.  They also discuss the link between adventure, sport and development, as they reflect on their motivations for their extraordinary expedition.

Passionate about using sport as a tool for social change, Messrs Owens and Rutland have embarked upon their grand cycle to raise funds and awareness for the principal charity partner of the Rugby World Cup 2019, ChildFund Pass It Back.  ChildFund Pass It Back is an innovative programme that delivers an integrated life skills and rugby curriculum for youth in disadvantaged communities across Asia.  It seeks to equip young people with valuable life and leadership skills, and to provide disadvantaged youth with an expanded support network by enabling them to play as part of a team.

Ron Rutland is a former rugby player and entrepreneur from South Africa.  He has previously spoke to RGS-HK on his world-first unsupported solo bicycle ride through the entire continent of Africa: “Cycling to Every Country in Africa: Getting to the Rugby World Cup the Long Way”.  Mr Rutland has resided in South Africa, Australia, Hong Kong, the United Kingdom and Thailand over the last 20 years.  He is a former financier from London and Hong Kong, and has also led entrepreneurial ventures in the mobile phone industry in Thailand.  He has previously worked for the rugby events management industry in South Africa. Most recently, he served as General Manager for Business Development for the Hong Kong Rugby Union.  Besides his solo cycle through the African continent in 2013, and his current cycle to the Rugby World Cup 2019, Mr Rutland also completed a world-record-breaking hole of golf across the expansive, untouched landscapes of Mongolia in 2017.  He speaks globally about his expeditions.

James Owens is a development professional with a special interest and experience in evidence-based Sport for Development programmes.  He is from Hong Kong, and was subsequently educated at the University of St Andrews, the United Kingdom, before returning to Asia to spend a year cycling around Taiwan.  Mr Owens joined ChildFund Pass It Back in 2015, where he currently serves as Regional Operations Officer.  He has been based in Laos and Vietnam over the past four years, overseeing Sport for Development projects in Laos, Vietnam, Philippines and Timor-Leste.