Mongolian Extremes: Living as a nomad with Kazakhs and Eagle Hunters of the West of Mongolia 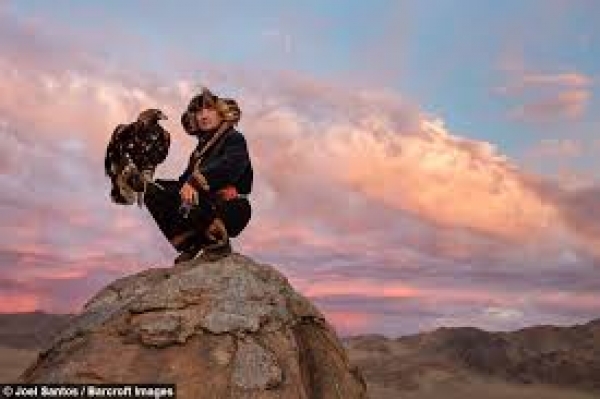 While trekking, he was tasked with looking after the support camels and developed a close friendship with a local Kazakh nomad, Alibek.  Just months later, he joined Alibek and his family and lived for 3 months as a nomad through the harsh winter of the Altai Mountains.  Alibek and Chris’s friendship deepened, and they have since embarked on another six expeditions, mainly in the western region of Mongolia, including to the eagle hunters of the Altai Mountains.  Chris has hunted with eagles, rode horses across the icy tundra and lived as the Kazakh nomads have for hundreds of years.

In this talk, illustrated with a brief documentary, Chris tells what it was like to walk across the Gobi and live with nomads - and the story of his most recent expedition, the Spring Migration.  The Spring Migration is an annual event that sees nomadic families move their home and animals hundreds of kilometres through biting temperatures across the Altai Mountains.  With more extreme winters than ever as a result of climate change, this trip has become more challenging and gruelling than ever.  He also describes living with ancient peoples, the harsh nomadic life of the reclusive Kazakh nomads and the eagle hunters of the Altai Mountains, and residing in temperatures as cold as 60 degrees Celsius.

Christopher Schrader was educated at United World College in Hong Kong and is presently on extended leave from his undergraduate studies at Harvard University.  Already an endurance athlete, at 16 his first expedition was a 600 km hike across England.  In 2010, he cofounded the Walking With a Purpose Foundation to raise money for charity.  Later that year, he completed the Hong Kong Challenge, a 150 km run, swim and row across Hong Kong in 24 hours. He also founded the Youth Endurance Network, which facilitates numerous events including Running to Stop the Traffik and YEN expeditions.

Chris is also founder and chairman of the 24 Hour Race, a global non-profit fighting slavery.  He is also an avid adventurer, including having cycled across Canada for the speed record, amongst many other expeditions.  He is one of the youngest persons awarded a fellowship at the Royal Geographical Society and has helped raise over US$10m for a plethora of causes globally. He has spoken at over a hundred schools from Kuala Lumpur, to Ulaan Baator, to London.

The Royal Geographical Society - Hong Kong wishes to express its thanks to UBS as the Venue Sponsor of this talk.