William Furniss with Howard Bilton
Thursday, 17 Oct 2019
Google Calendar Outlook Calendar
Drinks Reception 6.30 pm; Talk 7.30 pm
1/F, The Hong Kong Club, 1 Jackson Road, Central
Pre-payment is required. Please note no denim, T-shirts, flip-flops or sportswear are permitted at the HK Club, For further details, please go to https://docs.google.com/document/d/1w9lZnFcbD4arPUGqIYtQxJBWybAwEGPAW-Wggesz2XY/edit
In this talk, photographer William Furniss looks at Queen’s Road West’s amazing traditional businesses and culture - before the arrival of the MTR and property developers changed the face of the area for good. Queen’s Road West begins at its junction with Possession Street on the edge of Sheung Wan and ends at Kennedy Town Praya. Over the course of a year, William and various assistants photographed and interviewed numerous business owners along the road. 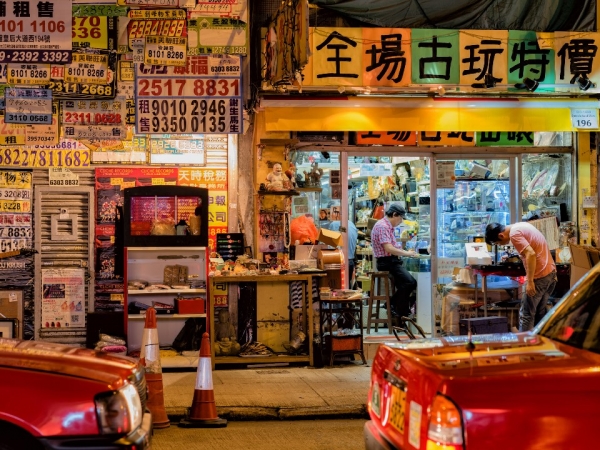 Many of those interviewed were older people with great stories to tell, for instance the octogenarian best friends who, orphaned in Guangdong, arrived in Hong Kong as refugees and run a haberdashery store.  Also many businesses are extremely old, with one bamboo basket business in operation for more than a century.

The talk focuses on the history, images, and stories of this iconic Hong Kong street, emphasising its eclectic nature and value as a mixed use neighbourhood.  Even since 2016, the road has indeed changed with some surprising closures, which William discusses.

William Furniss is an urbanist and architectural photographer based in Hong Kong.  He hails from London and holds an engineering degree at Exeter University, United Kingdom.  He started his photographic career in 1991, initially as a portrait photographer.  William assisted luminaries of the London photographic scene such Patrick Litchfield and Terry O’Neill.

In 1993, he moved to Hong Kong, where he become an urban photographer.  William’s interest in cities led him to New York in 1999 with two years spent there developing his approach which today favours pre-visualisation of the image and camera- only manipulations to make a subjective but recognisable record of cities.  Numerous exhibitions have been held of William’s work worldwide, which features in collections in Hong Kong and elsewhere.

Howard Bilton is Chairman and founder of The Sovereign Group, one of the world’s largest consultancies specialising in the provision of offshore trusts and companies.  He hails from the UK and studied at the University of Keele.  He is a qualified Barrister and lectures throughout the world on tax and offshore related subjects.  He is the founder of The Sovereign Art Foundation which runs the annual Sovereign Art Prizes which raises money to help disadvantaged children.

Saddened by the removal of Sammy's Kitchen’s famous neon cow on Queen’s Road West in 2013, Howard Bilton and William decided to publish a book to document the thoroughfare’s traditional businesses, which became Queen’s Road West, The Vanishing Neighbourhood published in 2016.  In the talk, Howard Bilton also gives his thoughts about the changing face of a street he travels along every day.