Diving the World: Eight Thousand Dives in the Seven Seas

The Royal Geographical Society is pleased to welcome Paul Rose, the famous explorer and presenter of several highly acclaimed BBC documentaries, to speak on "Diving the World: Eight Thousand Dives in the Seven Seas".  In this lecture, the presenter of the BBC's Oceans, tells the tales of some of the most interesting of his 8,000 dives worldwide in an engaging and fun lecture.  This includes behind-the-scenes stories from his landmark BBC documentaries and seemingly impossible challenges on his expeditions to the world's remotest and most demanding regions, including numerous expeditions to both Poles. 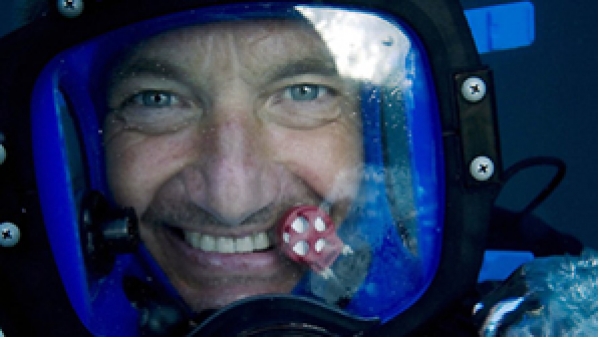 The oceans are the largest, least understood and least protected ecosystem on the planet.  Mr Rose has spent much of his career exploring the seas to help scientists understand the last great frontier on earth.  Mr Rose's work includes diving under the Arctic sea ice to report on climate change and ten years of diving under Antarctic ice in support of groundbreaking marine science.

In addition, to reveal the mysteries of some of the most ancient seas, he has dived the noxious Black Hole of Andros, the deep caves of the Mediterranean and hideous ocean-surge caves of Tasmania.  Bringing the wonders of the oceans to the world's television screens has led him to dive with Manta Rays, sharks of all types and even to cook eggs on underwater thermal vents.

Paul Rose has been at the front line of exploration for some 30 years and is one of the world's most experienced divers and polar travellers.  Mr Rose is Vice-President of the Royal Geographical Society.  He is an active explorer, television and radio broadcaster, field science expert and much published author.  He has been working in Antarctica and the Arctic every year since 1990.  In 2012 alone, he climbed Gunnsbjornfjeld, the highest mountain in the Arctic, and dived 305 metres to the bottom of Lake Geneva.

Mr Rose was previously the Base Commander of the Rothera Research Station, Antarctica, for the British Antarctic Survey for 10 years for which he was awarded HM The Queen's Polar Medal.  For his work with NASA and the Mars Lander project on Mt Erebus, Antarctica, he was awarded the US Polar Medal.  A popular and sought-after presenter, his television credits include the highly acclaimed BBC Oceans, Voyages of Discovery, Take One Museum and Meltdown.  He also reports for BBC News and makes regular appearances on numerous television stations worldwide.