Geoff Hill
Tuesday, 14 May 2013
Google Calendar Outlook Calendar
Book Signing and Drinks Reception 6.30 pm; Lecture 7.30 pm
Bloomberg, 27/F Cheung Kong Centre, Central
If you would like to attend this lecture, please would you reply stating the number of tickets you would like to book; there is no need to pay for your tickets in advance.

The Royal Geographical Society is pleased to welcome Geoff Hill to speak on "Motorbiking the World: The Round-the-World Centenary Expedition".    From April to June 2013, author, adventurer and motorcycle columnist Geoff Hill together with former road racer Gary Walker are retracing the journey of American writer Carl Clancy, the first person to take a motorbike around the world, 100 years ago.  In this lecture, Geoff Hill, one of the world's best-known motorcyclists, presents a humourous talk about retracing the first around-the-world ride 100 years on, together with anecdotes from his many other motorcycle journeys worldwide, including motorcycling from Chile to Alaska and circumnavigating Australia on a Triumph. 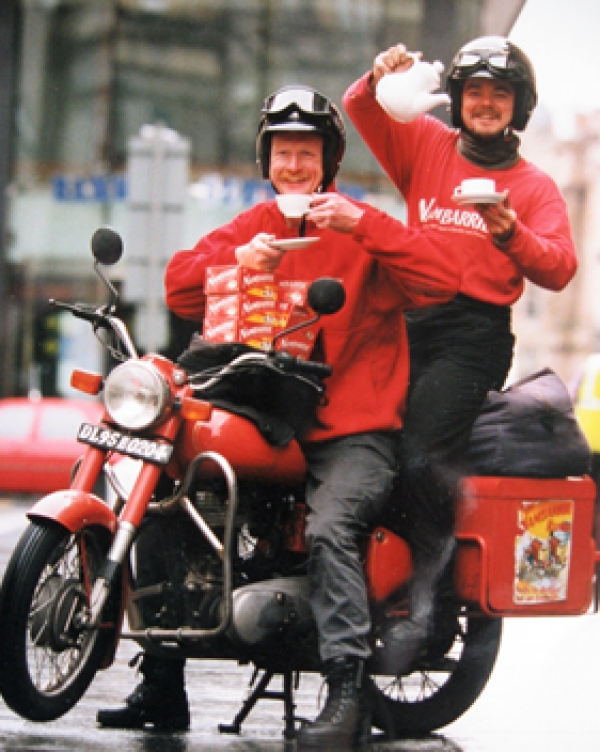 In 1913 Carl Clancy set out on the longest, most difficult and most perilous motorcycle journey ever attempted.  Mr Clancy circled the globe during 1912-1913 on a 1912 Henderson motorcycle.  There were no GPSs, ATMs, Internet, and often no fuel, roads or motorcycle repair shops.  Mr Hill initially describes the first motorcycle global adventure ride by an adventurer who survived a quest with his gun, determination and grit.

Mr Clancy started the expedition in the UK, and then rode on through Holland and Belgium to Paris.  He then rode down through Europe and across Algeria and Tunisia.  When he found he couldn't get petrol in India, he shipped his bike to Ceylon, rode around there and Malaysia, then travelled through Singapore, Hong Kong and Shanghai to Nagasaki, rode around Japan, shipped his motorbike to San Francisco and then rode home to New York.

In this lecture, Mr Hill, who is now two thirds of the way through his own expedition, having arrived in Hong Kong, recounts the story of his incredible journey to date.  The team, riding BMW R1200GS Adventurers, has motorcycled all around Europe, North Africa, Sri Lanka and much of South-East Asia, with a host of amusing trials and tribulations.  From Hong Kong, they motorcycle to Tokyo, before completing the journey by crossing America.  Mr Hill also tells tales from his numerous other motorcycle adventures worldwide, many of them now best-selling books.

Geoffrey Hill is a critically acclaimed author and award-winning feature and travel writer based in Belfast.  He is Ireland's most capped volleyball player and captained the Northern Ireland team at the Commonwealth Games.  Mr Hill writes about motorbikes for "The Sunday Times", the "Metro" series of newspapers and the "Irish Times", making him the most widely read motorcycle columnist in the UK and Ireland.  He's also the editor of "Microlight Flying" magazine.  Mr Hill has won UK travel writer of the year awards nine times.  He has also written about travel for the "Daily Telegraph", the "Sunday Telegraph", the "Independent" and the "Independent on Sunday". He was a long-standing editor for Fodor's, the best-selling American guide book series and has a long-running weekly travel show.

Mr Hill is also the author of several best-selling books, including on previous motorbike adventures such as "Delhi to Belfast", "Route 66" and "Chile to Alaska", novels "Smith" and "Angel Street", bike adventure books "Way to Go", "The Road to Gobblers Knob" and "Oz: around Australia on a Triumph".  The book of his present adventure has already been commissioned by Blackstaff Press.