The Royal Geographical Society is delighted to welcome Cameron Dueck, the journalist, adventurer and filmmaker, and Edwin Lee, the Film Editor, to present their new film documentary "The New Northwest Passage".  The film recounts how in the summer of 2009 Cameron Dueck led a gruelling 15,000 km sailing expedition through the elusive Northwest Passage of Canada, circumnavigating Canada via the Arctic Ocean, pioneering a new route around the Arctic.  He also witnessed at first hand how Canada's Inuit are coping with climate change, making the film a very personal story about communities residing on the edge, but also a globally relevant story about climate change. 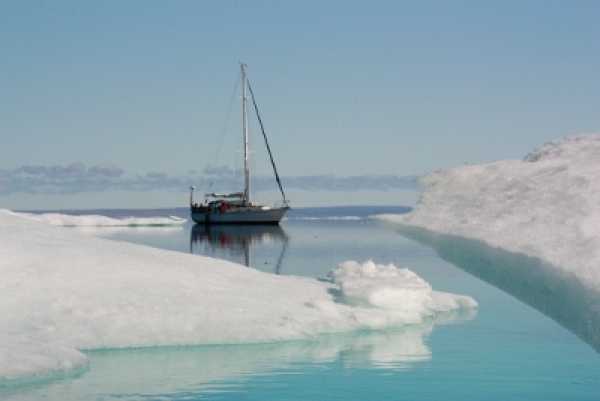 PLEASE SEE BELOW FOR A SYNOPSIS OF THE FILM BY ITS EDITOR, EDWIN LEE

Cameron Dueck hails from the Canadian Prairies and is now an international journalist, award-winning filmmaker and accomplished adventurer. His journalism career started in Chicago, moving on to New York City, followed by stint at Reuters as a correspondent in Singapore.  Mr Dueck, already an accomplished sailor, started his expedition career by sailing from Thailand to the Mediterranean, dodging pirates off the coast of Yemen and braving dust storms on the Red Sea, before setting off across the Atlantic Ocean.  He then restarted his career in journalism, joining the South China Morning Post and then the Financial Times in Hong Kong.  In 2009, he launched the Open Passage Expedition, setting sail for Canada's Northwest Passage.  The journey led to Mr Dueck's first book, an award-winning documentary film and an app, all titled The New Northwest Passage.

"The 40-foot yacht Silent Sound bumps through ice and fog in the infamous Northwest Passage, her small crew nervously scanning the horizon for clear water.  Fewer people have sailed this passage than have climbed Mt Everest.  These waters are normally locked in ice, but due to climate change it is now possible to sail here for a few weeks each summer.  The crew drop anchor in Inuit villages where they join hunters in stalking their game and experience the last vestiges of an ancient nomadic culture.  Each person they meet destroys another stereotype about the Inuit and their way of life.

Since the discovery of the New World, the Northwest Passage has been an elusive dream for explorers and mariners alike.  Throughout the grand age of exploration it remained one of the few unattainable prizes, luring men hungry for fame and fortune to sail north in search of this frozen passage.

In 1906, Roald Amundsen became the first man to sail through the passage.  This "shortcut" took him more than three years to complete.  But even then, few men could boast of sailing its entire length.  Climate change, however, is causing temperatures in the Arctic to rise twice as fast as elsewhere on the globe.  Sea ice is melting and warmer temperatures are forcing Arctic communities and wildlife to adjust to survive.

A warmer climate has opened the Arctic to sailors.  However, until the summer of 2009, only about 35 small sailing yachts had ever sailed the Northwest Passage.  Charting of these waters remains scant, relying in some instances on data collected a hundred years earlier.  The pull of the magnetic North Pole renders compasses useless and poor satellite coverage the over the polar region means global positioning systems are unreliable.  The Northwest Passage remains an epic yachting challenge.  The goal was not only to sail the passage, but to see climate change with our own eyes.

The greatest impact of climate change is on those who call the Arctic home.  The traditional life of the Inuit has been threatened since well before the ice started melting, by the influence of modern media and consumer culture, by a lack of jobs and education, and by the activity of the fur, whaling, fishing, mining, and oil industries.  Climate change is just their latest challenge.  This documentary provides a look at a traditional North American culture as it begins to disappear.

Silent Sound sails out of Victoria Harbour to the sound of bag pipes and the prayers of a priest.  The crew will have to rely on themselves and their boat for the next four months as they face the ice and storms of the Arctic.  The sea ice could crush the hull of Silent Sound like an eggshell.  It stretches for miles around as first mate Hanns climbs the mast to look for a clear lane of water.  On the ice are hundreds of walruses, sunning themselves and bellowing at the Silent Sound as she sails past.

On Herschel Island, Cameron, the skipper, follows scientists as they catch and tag a red fox that has migrated north with the warming temperatures.  The entire island is collapsing due to melting permafrost.  By the time Silent Sound reaches Tuktoyaktuk the initial thrill of the voyage has passed and the crew is kept busy repairing their yacht.  The crew makes many new friends in Tuktoyaktuk, from the children that play on the docks to the Inuit family who serve a traditional meal of whale blubber and dried fish.

Ice is blocking Silent Sound's planned route, so Cameron steers her north in an attempt to bypass the danger and reach Sachs Harbour, one of Canada's more remote Arctic communities.  They experience the clash of old and new Inuit culture, fur hats and internet gambling.  Silent Sound is now in the heart of the Northwest Passage.  "What does it mean to be Inuit?" the crew asks. A grandmother skinning seals in Uluhaktuk explains that "Inuit" means a whole being, encompassing the physical, spiritual and mental parts of a person. These aspects are under threat from modernisation and climate change, a struggle her people are unlikely to win.

As they near the half-way point of their four-month journey the calm of the open sea is broken with a thump, a bump and a shudder of the ship.  Silent Sound has run aground.  They must wait for the next high tide to float them free.  Once in port they discover the damage done to the yacht, and their visit to Cambridge Bay is becomes a nightmare of mechanical repairs.  Cameron and Hanns work frantically to make Silent Sound seaworthy once again, worried that the ice might lock them into the Arctic for the winter.

In Gjoa Haven, the crew joins an Inuit family of hunters on the tundra.  The grizzled patriarch skins and dresses two caribou, producing a special treat, raw caribou kidney, partially digested grass fresh from the stomach and liver.  Cameron joins in the feast with a grimace.

Silent Sound arrives at the end of the Northwest Passage as winter nears.  They still have a long and difficult journey home, but the crew is already among the few people to have seen who the Inuit really are and what climate change means for their society."