The Search for 'Wallace's Line': the Heroic Journey of Alfred Wallace in Southeast Asia

The Royal Geographical Society is pleased to bring to Hong Kong one RGS London's most popular recent lectures, by famous author and speaker Paul Sochaczewski, lecturing on "The Search for 'Wallace's Line': the Heroic Journey of Alfred Wallace in Southeast Asia ".  In this lecture, Mr Sochaczewski gives a finely illustrated presentation on the great naturalist Alfred Russel Wallace, FRS, focussing on his 22,500 km of land journeys across uncharted Southeast Asia.  Alfred Wallace has the most famous natural line across the world named after him, 'Wallace's Line' the divide between mammals and marsupials caused by an ocean trench running through the Indonesian islands.  He is also recognised by Mr Sochaczewski as the co-discoverer with Darwin of the theory of natural selection, having first published the concept that "the fittest shall survive", as an edgy social commentator and as a voracious collector of natural specimens, including over 1,000 new species. 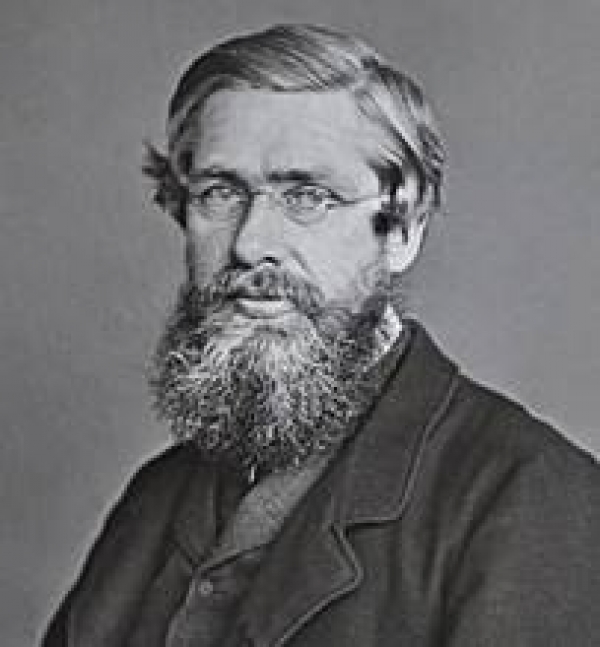 While exploring in the Malay and Indonesian archipelagos for eight years during Alfred Wallace's epic journey, he caught 125,660 creatures including 212 new species of birds, 200 new species of ants and 900 new species of beetles.  It was an extraordinary feat of logistics, for one man, on a tight budget and without organisational support, living rough in rainforests, to collect, identify, mount, preserve and transport 8,000 bird skins and 100,000 insects.  If Wallace did nothing more than collect and identify new species he would have left an important scientific legacy.  But the breadth of his interests raised him to the top tier of scientists.  The lecture also examines important themes including mankind's relationship with other species, humanity's need to control nature and how this leads to environmental destruction, with Mr Sochaczewski illustrating these ideas with humour, history, social commentary and some curious tales.

Alfred Russel Wallace was a self-taught British naturalist who left school at 13, a self-described "beetle collector" who travelled for four years in the Amazon and eight years in Southeast Asia.  During his Asian sojourn in the mid-19th century, he covered some 22,500 kilometres through territories which are now Malaysia, Singapore and Indonesia.    Wallace made his voyages without formal government support, without infrastructure and without much money.

His travels through the Malay Archipelago, supported by his knowledge of geology, helped him develop his understanding of the dynamics of island biology.  He observed that the "natural productions" he found in western Indonesia and Peninsular Malaysia were different to those in eastern Indonesia, due to changing sea levels and a combination of shallow seas and deep oceanic trenches.   By studying these differences, he developed a west-east boundary which came to be known as "Wallace Line," the dividing point between (western) Southeast Asian fauna (elephants, tigers, monkeys, apes and hornbills) and the fauna of the (eastern) Austro-Malayan realm (kangaroos, birds of paradise and marsupials).

Mr Sochaczewski also discusses who was this man and what drove him.  In particular, he discusses why he broke the cool Victorian mold by writing passionately about finding new butterflies and birds.  He was both a sentimentalist and a realist.  He campaigned against vaccination, vivisection, "flat earth", gambling, foreign aid, the welfare state, "junk" food, sweatshops, "red-tapism", child labour and women labour in coal mines.  He promoted, however, women's liberation, food and drug controls, income tax, labour unions, food stamps and the minimum wage.

Most importantly Mr Sochaczewski explores what led Wallace to develop his contributions to the theory of natural selection, first the Sarawak Law and then the famous Ternate Paper, written in 1858, in which he outlined the concept "the fittest shall survive".  Wallace sent the Ternate Paper to Charles Darwin, who up to that point had not published one word on evolution.  The next year Darwin published the Origin of Species.  He re-asks the questions, did Darwin and Wallace arrive at their similar ideas independently and did Wallace get sidelined in the quest for priority by the more prominent and well-placed Darwin.

Paul Sochaczewski read psychology at George Washington University before joining the United States Peace Corps.  He has since resided and worked in some 70 countries.  He was a director of J. Walter Thompson advertising agency and then a freelance journalist in Singapore and Indonesia, residing for 15 years in Southeast Asia.  Subsequently, he joined WWF International where he re-positioned WWF away from being an organisation concerned only with endangered species to one that emphasised the relationship between the environment and people's well-being.  He has authored some 10 books and written over 600 articles for, among others, CNN Traveller, International Herald Tribune, International Wildlife, Reader's Digest, Geographical, Travel and Leisure and the Wall Street Journal, most about his travels in search of unusual people and places.  His books include Malaysia: Heart of Southeast Asia, Indonesian Heritage Encyclopedia, Eco-Bluff Your Way to Instant Environmental Credibility, Redheads, The Sultan and the Mermaid Queen, Distant Greens, Soul of the Tiger: People and Nature in Southeast Asia, Encyclopedia of Malaysia, Tanah Air: Celebrating Indonesia's Biodiversity and An Inordinate Fondness for Beetles, a personal travel quest in the footsteps of Alfred Russel Wallace, which was published in 2012.  A well-known speaker, he has lectured in some 20 countries worldwide.

Members and guests are most welcome to attend this lecture, which is HK$150 for Members and HK$200 for guests and others.

"The legendary Mandarin Oriental, Hong Kong hotel, that is celebrating '50 Fantastic Years' throughout 2013, is providing Paul Sochaczewski a home-away-from-home in the heart of Central for this visit.  For further information on its 50th celebrations please visit: http://www.mandarinoriental.com/hongkong/fifty-anniversary/ "