Stephen Venables, hero of the first ascent of Mt Everest by its Kangshung Face from Tibet in 1988 and the first person to stay the night on the summit of Mt Everest Chairman of the Mount Everest Foundation
Tuesday, 18 Jun 2013
Google Calendar Outlook Calendar
6.30 pm Drinks Reception and Book Signing ; 7.30 pm Banquet Dinner and Lecture
HK Fooll Club, 3 Sports Road, Causeway Bay
Please note that this event is in support of the RGS-HK Scholarship Fund

The Royal Geographical Society – Hong Kong is delighted to be celebrating the first ascent of Mount Everest in 1953 with a gala Everest Diamond Jubilee Dinner.  The Royal Geographical Society organised and sponsored the original successful expedition, making this an important event for the Society and its Members in addition to the world at large. 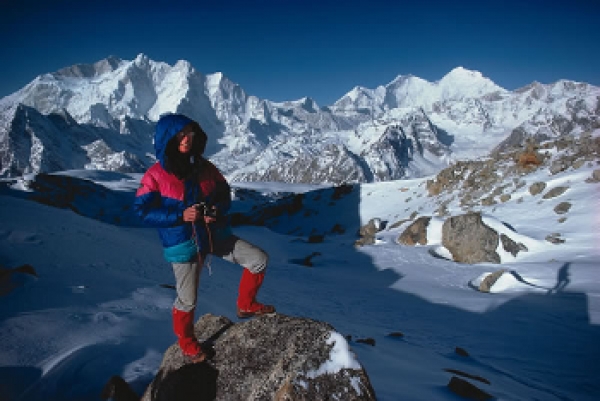 The Royal Geographical Society is delighted and honoured to be welcoming to Hong Kong Stephen Venables, one of the world's greatest mountaineers, and famed as a suave, witty speaker, as Guest of Honour for the dinner lecture.  In addition to being the author of Everest – Summit of Achievement, the best-known history of the mountain, in 1988 Stephen Venables reached the summit of Mount Everest alone and without the use of oxygen, by pioneering a new route up the gigantic Kangshung Face from Tibet, of which 2013 is the Silver Jubilee.

In 1953, following several attempts by expeditions from several nations, the Royal Geographical Society decided to make a decisive attempt to summit Mount Everest.  The expedition, with substantial funding and the most modern equipment then available, was led by RGS Fellow Colonel Sir John Hunt.  Sir John proved a superb leader both technically and as a leader of men.  Following a siege-like expedition involving a team of over 200 men, at 11:30 am on 29 May 1953 two of the expedition's climbers, Sir Edmund Hillary followed shortly afterwards by Tenzing Norgay, reached the summit at via the South Col Route.  Captain James Morris (now Jan Morris), who was waiting at 26,000 ft, famously managed to get the news of the expedition's success to London on the morning of Queen Elizabeth II's coronation on 2 June 1953, to universal celebration in Britain and the Commonwealth.

Stephen Venables's Everest climb was a thrilling highlight to a career which has taken him right through the Himalaya, from Afghanistan to Tibet, making first ascents of many previously unknown mountains.  His adventures have also taken him to the Rockies, the Andes, the Antarctic island South Georgia, Africa and the European Alps, where he has climbed for nearly forty years including a new route on the celebrated north face of the Eiger.  On his Everest triumph, since he reached the summit during the afternoon, he had to spend the night alone, at the summit without a tent, then the highest ever bivouac, followed by an epic 3-day descent without food.  In 2000, he was chosen with Conrad Anker and Reinhold Messner, as perhaps the world's three greatest active mountaineers, to star in the film Shackleton's Antarctic Adventure which played world wide.

Stephen Venables was educated at Charterhouse and at New College, Oxford University.  In addition to his mountain fame, he is a prolific writer, with articles published in more than 30 publications including Mountain, American Alpine Journal, Geographical, Yachting Monthly, Conde Nast Traveller, Sunday Times, and the Observer.  He has published some ten books, including Everest Alone at the Summit, Island at the Edge of the World - A South Georgia Odyssey, A Slender Thread, The Story of Everest and Everest – Summit of Achievement.  Mr Venables has also appeared in several documentaries about mountaineering, including To the Third Pole, Beating the Blizzards and Shackleton's Antarctic Adventure.  He holds seven prizes for literature, including the WH Smith Travel Book Award.  A suave, witty speaker, he has lectured to over 200 organisations in some 20 countries.  Mr. Venables has been Chairman of the Mount Everest Foundation, President of the Alpine Club and President of the British Mountaineering Institution.

For this event, there is pre-booked individual seating available, or you may arrange a group at a table, or book a table of 12 people.  Tickets for this event are priced at HK$750 for RGS Members and HK$850 for Guests.  This includes the drinks reception and a three-course banquet dinner with wine.  Please note that all proceeds of this event are in support of the RGS-HK Scholarship Fund.  If you would like to attend this event, please reply by e-mail to This email address is being protected from spambots. You need JavaScript enabled to view it. for a booking form.

The Royal Geographical Society - Hong Kong wishes to express its thanks to HSBC for its generous Title Sponsorship of this event.