The Royal Geographical Society is delighted to welcome one of the world’s most distinguished scientists, Professor David Drewry, to lecture on “Lake Vostok, Antarctica: The World's Remotest Lake”.  In this lecture, Professor Drewry gives a detailed description of the astounding discovery of the vast Lake Vostok, lying beneath almost 2½ miles of ice at the centre of the Antarctic continent, at the coldest spot on earth.  This lake, as big as Lake Ontario, is the only major lake to be found for more than 150 years.  It is of intense scientific interest, revealing not only the history of the earth, but also believed to harbour unique organisms unknown to science, having been “sealed” for some 25 million years. 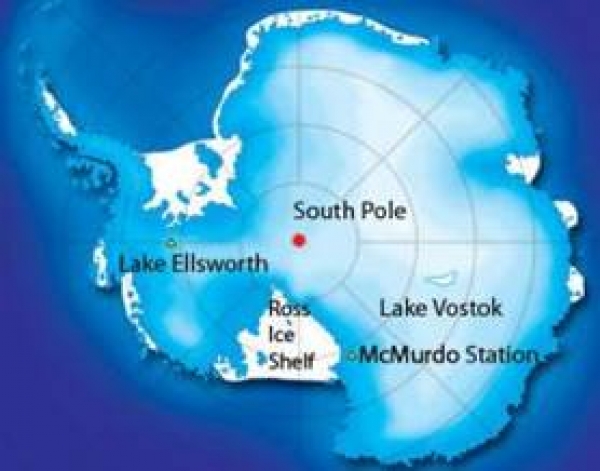 Lake Vostok was discovered in the mid-1970s by detailed radio echo sounding by the Scott Polar Research Institute of Cambridge, which was measuring the thickness of the ice sheet, its internal structure and map the land beneath.  The lake’s identification was deduced from radar records that showed very strong echoes reflected from a water layer, located in a depression in the land surface. It was also at a place where the temperatures at the bottom of the ice were calculated to be at melting point.

Russian glaciologists at Vostok Station at the time were conducting deep drilling for ice cores for climate studies.  When the presence of the lake was made known, coring was terminated some 120m above the lake’s surface to prevent contamination but the lowest ice revealed evidence it had been re-frozen confirming the existence of the lake.  Thereafter, an international programme was initiated to explore further the lake geophysically, to devise methods for drilling into the lake to sample its water column without contamination and to discover what organisms it might contain.  It was not for 13 years, in early 2012, that drilling penetrated the lake.

Meanwhile many tens of other but smaller lakes were discovered beneath the ice as well as evidence for hydrological systems connecting some of them.  One other lake in West Antarctica, named "Lake Ellsworth", has also been the subject of detailed investigation and in 2012-13 plans were executed to drill into the lake using hot-water techniques.  There is intense scientific interest in the exploration of these remote and extreme environments and habitats.

Professor David Drewry is a Fellow of Emmanuel College, Cambridge, a Trustee of the Natural History Museum, London and Vice-President of the European University Association. He was Vice-Chancellor of the University of Hull between 1999 and 2009.  He holds a Doctorate in Geophysics from Cambridge University and is a world expert on the environmental sciences and climate change.  Professor Drewry has published three books and more than 100 research papers on these subjects, including in Nature and Science.  He has led scientific expeditions to Antarctica, Greenland, Svalbard and the Russian Arctic.  He was President of the International Arctic Science Committee, served on the UN’s Inter-governmental Panel on Climate Change and has been Vice-President of the Royal Geographical Society.

His previous positions include Director of the Scott Polar Research Institute, University of Cambridge, Director of the British Antarctic Survey and Director-General of The British Council.  He is Visiting Professor to the Universities of London, Xiamen and Krakow Academy (Poland). He holds Honorary Degrees from several universities, is recipient of the HM the Queen’s Polar Medal, the United States Antarctic Service Medal, the Patron’s Gold Medal of the Royal Geographical Society and Prix de la Belgica of the Royal Academy of Belgium.  He has a mountain and a glacier named after him in Antarctica.