The Royal Geographical Society is delighted to introduce this year's concert lecture. The evening starts with a performance by the Mongolian "Khusugtun National Musical Troupe", who have performed globally including at the Royal Albert Hall. The performance includes a variety of traditional instrumental and vocal music, together with Mongolian dancing, all with splendid traditional costumes. 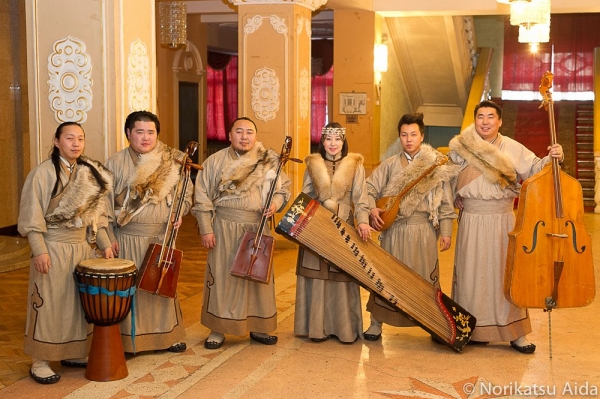 Following a short break, we are then delighted to welcome to Hong Kong Carl Robinson, to lecture on "Mongolia & the Silk Road". This beautifully illustrated lecture provides an insightful introduction to the diverse natural history and culture of Mongolia, a land of amazingly rich history, spectacular geography and hospitable people. From his 20,000 kilometres of journeys on un-paved roads to places few tourists see, Mr Robinson introduces the history, geography, people and culture of this entrancing land, including its recently researched key role in the development of the Silk Road.

Regarding the history of the Silk Road, the lecture looks at how, while the Mongol Empire of Genghis Khan in the 13th Century is well-known, Mongolia’s much earlier links with the Silk Road are often overlooked by historians. Despite its seeming remoteness and cultural differences, Mongolia had strong links with the 6,500 kilometre-long Silk Road trading route, linking East and West, from the first millennium BC. The recently researched evidence for this is explained by Mr Robinson.

Mr Robinson discusses the origin and history of these connections in the many centuries before the Mongol Empire inaugurated a golden age of trade when, as a Turkic historian describes, “a young virgin with a tray of gold on her head” could travel unmolested from the Pacific to the Mediterranean. It was also the era when the first Europeans, including Marco Polo, were able to make their way eastwards, while many Asian products reached the West for the first time. The early travellers encountered Mongolia’s classic rolling steppe land, together with snow-capped peaks towering over grassy valleys, meandering rivers and great lakes as well as badlands, dramatic gorges and mighty sand dunes rising from flat desert floors, which they described vividly.

Mr. Robinson hails from the United States. Having studied in Hong Kong in the 1960s, he spent nearly a dozen years in Vietnam, first as a development worker and then as a journalist for the Associated Press escaping at the fall of Saigon. He moved to Australia in the 1970s where he worked for Associated Press and Newsweek. He was also Media Manager for the Sydney 2000 Games and Production Adviser for the film The Quiet American. All along, Mr. Robinson has continued to travel, photo, lead tours and write prolifically. His publications include Illustrated Guide to Australia, Australia - The Great South Land, and his guide to Mongolia, Mongolia: Nomad Empire of Eternal Blue Sky. Mr. Robinson, who is known for his wry sense of humour, has extensive public speaking experience and has done numerous television and radio interviews over the years.

Members and their guests are most welcome to attend this concert and lecture, which is HK$150 for Members and HK$200 for guests and others.