The Royal Geographical Society is pleased to welcome again Professor Peter Clift, to lecture on "The Pearl River Delta: 2,000 Years of Change". In this lecture, Professor Clift shows how he has retraced 2,000 years of history and change in the Pearl River Delta. He shows that major changes are not just linked to the first settlement of the basin but rather to the intensification of agriculture and increase in population density after the conquest of the Pearl River Delta by the Qin Dynasty some 2,000 years ago. This is then followed by two thousand years of changes, culminating with the huge changes caused by the industrial revolution of the past 50 years. 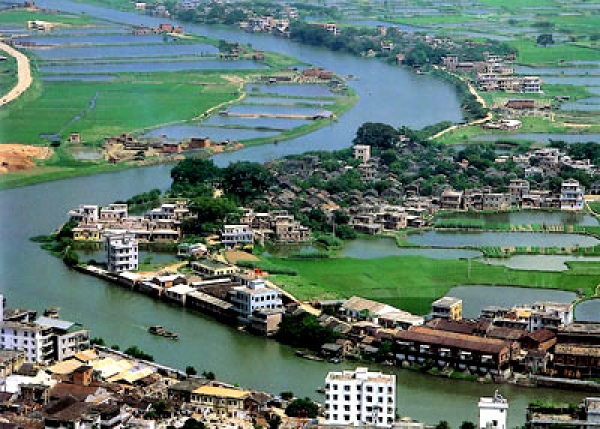 The written sources of the Pearl River Delta indicate that the population of the area increased by more than eightfold around 2,000 years ago. This change is reflected in a dramatic change in sediment characteristics which proves the widespread settlement of southern China at that time. In particular, it shows the establishment of agriculture, especially sugarcane agriculture, through the region. Farmers disrupted the previously stable soils and allowed more chemically altered materials to be delivered to the delta.

Changes have continued to occur ever since, with massive modern disturbance. This is particularly following the industrialisation of the delta, though this is just the continuation of a very long term trend of anthropogenic impact on the landscape. In this way, humans have impacted the landscape of southern China as dramatically as any climate change that has affected the region since the end of the last glacial period from 10,000 years ago. In modern times, dredging plus huge industrialisation, have changed the region almost beyond recognition. In his talk, Professor Clift untangles the wide variety of human and natural changes to the delta using his data from extensive cores of sediments from the floor of the estuary and offshore areas.

Professor Peter Clift read Earth Sciences at Worcester College, Oxford, followed by taking a doctorate in Geology & Geophysics from the University of Edinburgh. Following a brief career in the exploration geology industry, he held academic posts at several universities in the United States. From 2004 to 2012, Professor Clift was Professor of Geology at the University of Aberdeen. He is now Professor of Petroleum Geology at Louisiana State University. While widely recognised for his work on Holocene climate change, for which he is widely published, he is perhaps best known for relating his geomorphologic work to human civilisations. He speaks widely at conferences worldwide, is a visiting lecturer at several universities and advises academic organisations worldwide.