The Royal Geographical Society is pleased to welcome Dr Stephen Fabes to lecture on "Cycling The Six: by Bike around Six Continents".  In this entertaining and inspiring lecture, British doctor Stephen Fabes tells how almost five years ago he waved goodbye to friends and family and set out to cycle across six of the earth's continents, perhaps the longest intercontinental cycle ride in history.  So far he has pedalled almost 70,000 km, a distance equivalent to almost twice the circumference of the earth, through 55 countries on six continents, including the length of Africa and the Americas. Of this, nearly 10,000 km has been off-road, an extraordinary feat on a pedal bicycle. 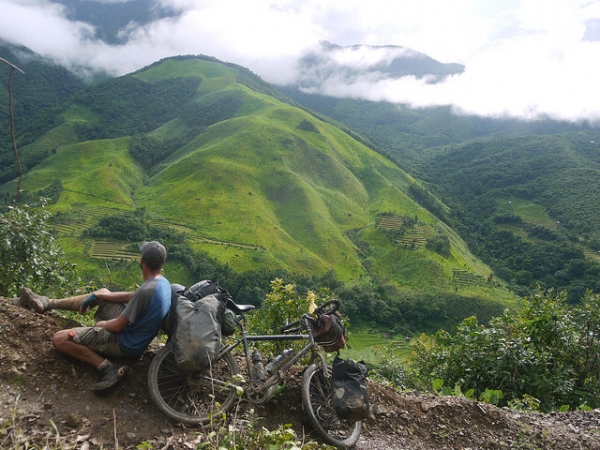 Dr Fabes arrives at Hong Kong in time for the RGS Hong Kong Christmas party, with a year left of his journey.  He speaks about what inspired him to leave behind a comfy life in London and tells amusing stories about close shaves with lions in Africa, biking over the Andes ten times, together with unexpected hospitality and generosity in Syria.  He also speaks of visiting medical clinics in remote tribal badlands in Africa, riding across the earth’s largest salt flats and making friends with a man who put a gun to his head in Peru.  He also shares his unexpected expertise of how to keep Canadian grizzly bears at bay with bear spray.

Reviewing his extraordinary route from the UK through Europe, he then describes his adventures in the Middle East and Africa, where he visited Syria, Jordan, Egypt, the Sudan, Ethiopia, Uganda, Rwanda, Tanzania, Malawi, Zambia, Botswana, Namibia and South Africa, among numerous other countries.  He next went to the Americas, visiting Argentina, Chile, Bolivia, Peru, Ecuador and Colombia, before going north to Panama, Costa Rica, Nicaragua, Honduras, El Salvador, Guatemala, Mexico, the USA and Canada.  He has since biked around Australasia and much of Asia.

Dr Stephen Fabes was educated at Abingdon School, Oxfordshire.  Following school, during his gap year in 2000, he cycled 6,000 km along the length of Chile in five months, aged just 19.  He subsequently read medicine at Liverpool University's medical school.  Prior to leaving on his epic trip, he was a practicing doctor in London specialising in tropical medicine.