Lynn Paterson is the first person to have completed a solo 5,800-kilometre circumnavigation of New Zealand by sea kayak.  She tells the exciting story of this seemingly unachievable feat, showing how taking it day by day, paddle stroke by paddle stroke, she was eventually able to fulfil what no one had ever achieved before.  To achieve her goal, Lynn made 3 million paddle strokes over 180 days to achieve her circumnavigation, viewing on the way the astonishing beauty of the New Zealand coastline and its wildlife. 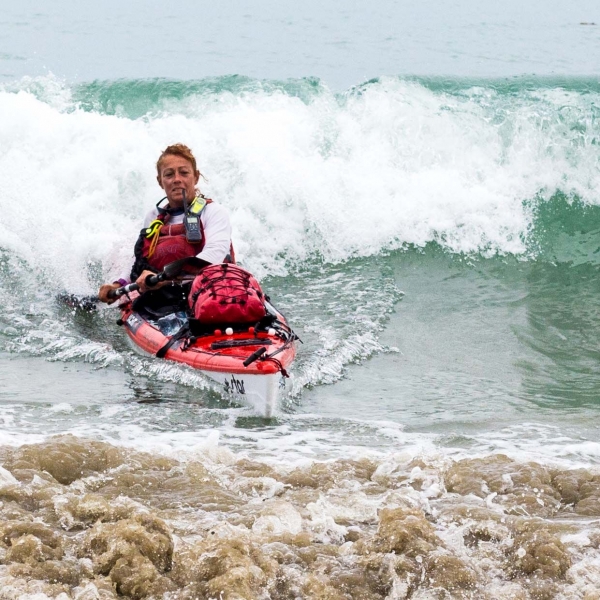 It was far from easy.  For 18 months beforehand, with the help of a trusted coach, she undertook a punishing training schedule – rising very early each morning, six days a week, to run, swim and paddle, to practice mind and body-numbing Eskimo rolls and to do gym workouts before going.

She left from Takapuna Beach on Auckland's North Shore, paddled past Rangitoto Island and to the Hauraki Gulf.  Paddling down the east coast of New Zealand she passed Napier and Wellington and on to the South Island.  Here, far south of Christchurch, she reached New Zealand’s fjord land before paddling up the west coast of South Island.  Crossing the Cook Straight again, she paddled to the far north tip of New Zealand to the cliffs at Cape Reinga, where she was cheered by a crowd gathered at the top.

Paddling south again towards Auckland, it was in Northland that she completed her longest day paddling - 85.2km from Houhora Heads to Matauri Bay.   On average, she paddled 12 hours a day.  She then had to cross the precarious Bay of Islands.  The closing stretch was 40km from Martins Bay to Takapuna Beach again to finish the solo trip.  She was met with a hero's welcome.

Along the way, she interacted with all manner of wildlife, including whales, sharks and dolphins.  She also met gannets, fish jumping and cute blue penguins, shags and also dainty little birds that seemed to walk on water.  She also saw many unbelievable sights, met some fascinating characters and encountered unexpected setbacks which she tells with self-effacing humour.  She had not a few spills and several heart-stopping thrills, much of which and more are included in her talk.

Lynn Paterson hails from Auckland, New Zealand.  Prior to her expedition, she was for many years a Project Manager with an events company in Auckland.  She sold some prized possessions to buy a couple of sea kayaks and a campervan to be used as back-up transport, won sponsorship, and made her incredible expedition happen.