Walking the Lines of Beijing: An Artist's 1,350 km Walk around Beijing

Gareth Fuller
Tuesday, 29 Sep 2020
Google Calendar Outlook Calendar
7.00 pm to 8.00 pm
Webtalk
The event is free of charge for members. For guests or non members, the registration fee is $50. Please click into https://www.rgshk.org.hk/payment-for-gareth-fuller-s-talk-on-tue-29-sep for registration. The webinar link is going to be sent to members, members' guests and non members at 12.30 pm on 29 September.

British artist Gareth Fuller walked over 1,350 km around Beijing, including a circumnavigation, to hand-draw his map of China's capital.  This masterpiece is part of the artist's 'Purposeful Wandering' series, and perhaps the most extraordinary map of the city in modern times. 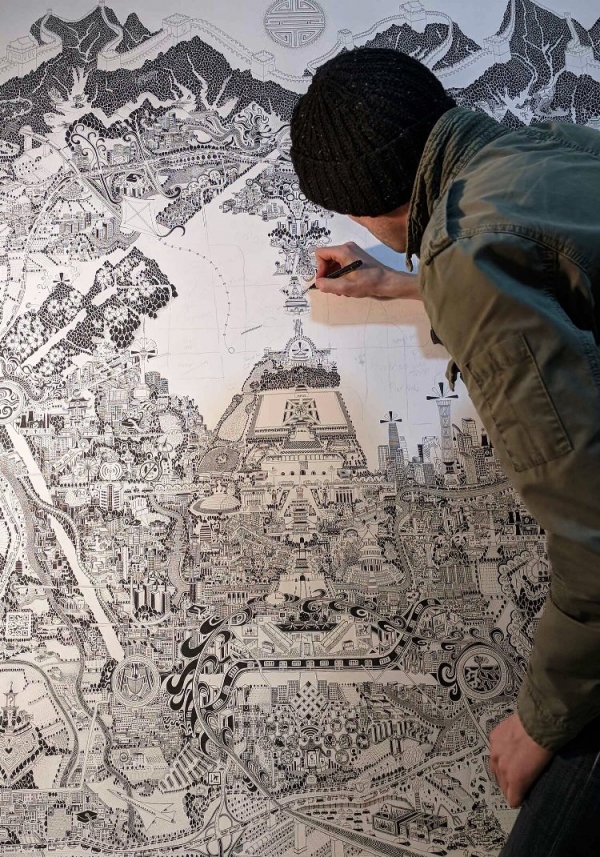 The talk is a unique opportunity to join Gareth as he shares the stories behind the drawings in his Beijing map and reflects on the challenges and mishaps of drawing a megacity of this scale.  He introduces the process behind his work as both artist and explorer and why he's drawn to document personal geographies in a world where digital mapping and storytelling have reshaped experiences of places.

Gareth Fuller hails from the United Kingdom.   His fascination with maps and the natural world stems from mountain leadership awards and high- altitude trails.  Early in his career, he worked on film and event productions from the Venezuelan Amazon to Siberia.  He now sets out to investigate the identity of places, depicting topographies and cultures through urban and rural exploration, extensive research, and local knowledge.

Gareth's celebrated map London Town was almost immediately acquired by the British Library and, shortly after, the Museum of London for their permanent collections.  In addition to London, he has made maps of Bristol and Pyongyang.  Beijing is currently on display at The British Ambassador's Residence, China.  His Bristol map is on permanent display at the Bristol Museum & Art Gallery (UK), and he has exhibited at the likes of Art Beijing, the Royal College of Art and the Royal Institute of British Architects.