Crossing the Empty Quarter of Arabia by Camel

Mark Evans
Tuesday, 13 Oct 2020
Google Calendar Outlook Calendar
7.00 pm to 8.00 pm
Webtalk
The event is free of charge for members. For guests or non members, the registration fee is $50. Please click into https://www.rgshk.org.hk/payment-for-mark-evans-talk-on-tue-13-oct for registration. The webinar link is going to be sent to members, guests and non members at 12.30 pm on Tuesday, 13 October.
In this talk, expeditioner and entrepreneur Mark Evans tells the extraordinary story of his 2015 re-enactment of the first ever crossing of the largest sand desert on earth, the Rub Al Khali, or Empty Quarter. This was an amazing 49-day journey of 1,300 km on foot and by camel. He reflects on how this month 90 years ago, British explorer Bertram Thomas was secretly making the original plans to become the first person to cross this seemingly impenetrable desert, the 1930s expedition which Mr Evans became the first to re-enact. 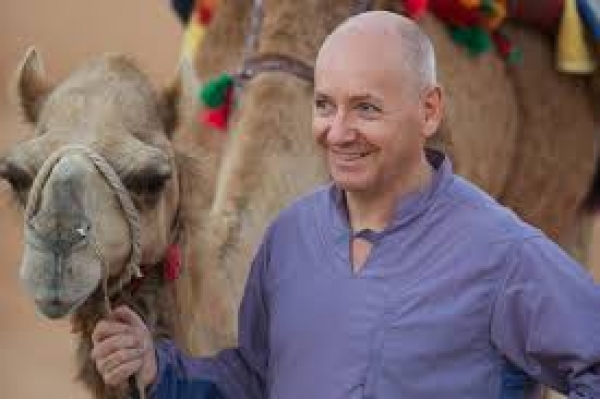 In the 1930s, the Western World was fascinated with Arabia – the last unexplored land outside Antarctica at the time.  Mr Evans recounts how this fascination inspired Bertram Thomas and a team of Bedouin companions to attempt the crossing of the largest sand desert on earth, which took them 60 days from Salalah in Southern Oman to Doha, the capital of Qatar.  Having arrived in Qatar, Mr Thomas was only able to communicate his achievements to the world after sailing to the Telegraph office in Bahrain.  Upon his return, he was awarded the Cullum Medal in New York and the Royal Geographical Society’s Founders Medal for his achievement.  The photographs taken by Mr Thomas on his crossing of the Rub Al Khali desert represent some of the earliest images of Arabia.

Mr Evans felt that given the rise to fame of Sir Wilfred Thesiger, an iconic figure of desert exploration, the achievements of Mr Thomas may be forgotten.  Thus, 85 years after the original journey, Mr Evans set out to re-enact the exact journey undertaken by Mr Thomas. Mr Evans tells of the extraordinary experience of crossing the desert, which at 650,000 square kilometres is larger than France, by camel and on foot.

Mark Evans was educated at Aberystwyth University in Wales.  He has been travelling in wilderness environments for 38 years, and has, among other things, spent an entire year living in a small tent 500 miles from the North Pole on Svalbard, which included four months of total darkness; crossed Greenland from east to west in 26 days by parachute and ski, on the trail of Nansen; and kayaked solo the entire 1,700-kilometre coastline of Oman.  Mr Evans has authored four books and was named a Pioneer of the Nation at Buckingham Palace for his services to the field of youth exploration in 2002.  In 2012, he was awarded the MBE for his work using expeditions to promote Intercultural Dialogue.  Mr Evans is the Executive Director of Outward Bound Oman, the first Outward Bound school in the Arab world.  He is Patron of the Andrew Croft Memorial Fund, a fellow of The Explorers Club, and the founder of Connecting Cultures, an educational initiative endorsed by UNESCO.