Sophie Cairns
Tuesday, 24 Nov 2020
Google Calendar Outlook Calendar
7.00 pm to 8.00 pm
Webtalk
The event is free of charge for members. For guests or non members, the registration fee is $50. Please click into https://www.rgshk.org.hk/payment-for-sophie-cairns-talk-on-tue-24-nov. The webinar link is going to be sent to members, guests and non members at 12.30 pm on Tuesday, 24 November.
Hong Kong-born Sophie Cairns, a former SCMP journalist, attempted to climb the highest volcano on each continent in four months. Each volcano presented unique challenges, from the bitter cold of Antarctica to the jungles of Papua New Guinea. And of course, as in all the best adventures, not everything went according to plan. 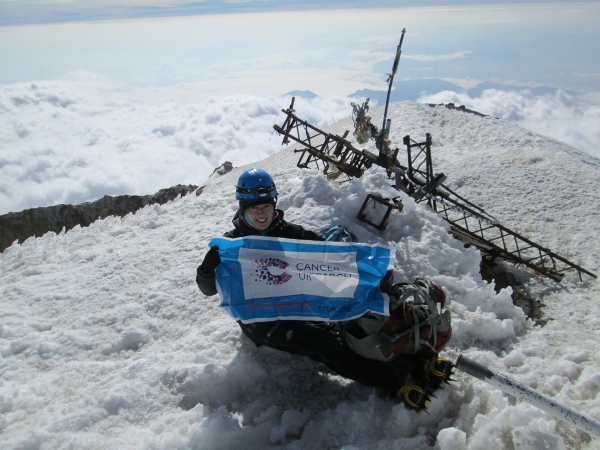 Everyone has heard of the Seven Summits, but the Seven Volcanic Summits represent a lesser-known and increasingly popular endeavour.  Sophie gives a first-hand account of what it is like to climb a volcano in Antarctica's unforgiving interior, run through the rainforest at night in the outback of Papua New Guinea and climb Ojos del Salado in Chile, the highest volcano on Earth.

Sophie describes the breath-taking views from Kilimanjaro in Tanzania and from the summit of Pico de Orizaba, Mexico.  She further tells of the little-known summit of Mount Sidley, Antarctica, and how she took a break on an acclimatisation climb of Mt Elbrus, Russia.

As an amateur climber, Sophie does not gloss over her limitations and sometimes hilarious mistakes.  She boarded her first plane in 7 layers of arctic-grade thermal wear and climbing boots only to be told by everyone else, who were sitting in T-shirts and shorts, “You don’t need to wear your Antarctica clothes yet - everyone changes before landing!”.

Sophie Cairns is from Hong Kong and was a journalist for seven years, first with the South China Morning Post, then with Reuters in Hong Kong, Shanghai and Paris.  Everything changed for her when she was 30 and a party-loving journalist in China.  She decided to defy her chronic asthma and climbed the world’s seven highest volcanoes to raise funds for charity.  Sophie won the 'Woman of Hope' award from Hong Kong’s The List magazine and addressed the annual banquet of the Sierra Club, the world’s largest outdoor organisation.  Her book Climbing the Seven Volcanoes: A Search for Strength was published in 2020. To purchase, please click here.