James Mwenda and Eva Kimani on live feed from the African bush
Thursday, 14 Jan 2021
Google Calendar Outlook Calendar
7.00 pm to 8.00 pm
Webtalk
The event is free of charge for members. For guests or non members, the registration fee is $50. Please click into https://www.rgshk.org.hk/payment-for-white-rhinos-s-talk-on-thu-14-jan . The webinar link is going to be sent to members, guests and non members at 12.30 pm on Thursday, 14 January.
In this talk, members join Ranger James Mwenda on live feed from the African bush, to learn about his efforts to save the Northern White Rhinos. As he stands live with the rhinos in their haven, he talks of the inspiration he draws from them as lessons for the needed solutions for the planet. 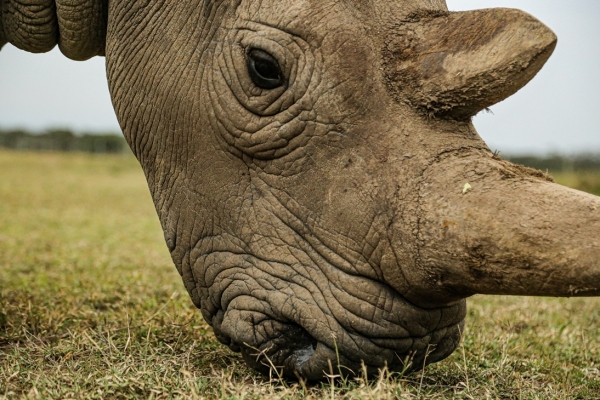 The northern white rhino is a subspecies of white rhino, which used to range over parts of Uganda, Chad, Sudan, Central African Republic and Congo.  Years of widespread poaching and civil war in their home range have devastated northern white rhino populations, and they are now considered to be extinct in the wild.  Only two remain in captivity, both on Ol Pejeta Conservancy.

James and his colleague Eva describe both the practicalities and the emotions of being the rhinos’ caretakers as they battle the road to extinction.  Eva also discusses the management of the Ol Pejeta Conservancy.  From the rhinos’ plights, they discuss the lessons mankind needs to learn at a time when 1 million plant and animal species are threatened with extinction.

James Mwenda is a passionate conservationist currently working at Ol Pejeta Conservancy in Kenya.  James is one of the caretakers of the last two known northern white rhinos in existence.  He was the narrator of the award-winning documentary "KIFARU" and the recipient of the Paradise Foundation’s 2018 African Ranger Awards.  Inspired to make a difference by witnessing extinction on a daily basis, for the last three years he has been globetrotting, speaking against species extinction as well as the well-being of the planet.

James has appeared on BBC Breakfast, BBC Podcast, Sky News, BBC's Seven Worlds, Euro News, GQ Magazine, One Planet, the recent BBC’s Extinction: The Facts with Sir David Attenborough, New York Times Magazine and many more.  He also has spoken to over 40 schools in three continents.  If he is not looking after his rhino “girlfriends”, he enjoys safari guiding, Mt Kenya hikes, photography and playing the guitar.

Eva Kimani is Education Coordinator – Community Development Programmes at Ol Pejeta Conservancy, Laikipia. She overseas implementation and growth of education activities both in and outside the conservancy to maximise the support provided by Ol Pejeta’s community development programmes to local schools and community groups.  She provides 19 community schools with ICT training and resources, manages the Ol Pejeta scholarship programme and conservation education programmes.


The opinions expressed in this talk are those of the speakers and do not necessarily reflect those of the Royal Geographical Society - Hong Kong.