Sharks - Up Close and Personal

Simon Lorenz
Thursday, 4 Feb 2021
Google Calendar Outlook Calendar
7.00 pm to 8.00 pm
Webtalk
The event is free of charge for members. For guests or non members, the registration fee is $50. Please click into https://www.rgshk.org.hk/payment-for-simon-lorenz-on-thu-4-feb . The webinar link is going to be sent to members, guests and non members at 12.30 pm on Thursday, 4 February.
While most people get shivers down their spine when hearing someone call “shark”, Simon Lorenz’s first reaction would be to grab his camera and jump in the water. The Hong Kong-based underwater photographer can’t get enough of sharks and trying to get as close as possible to them. 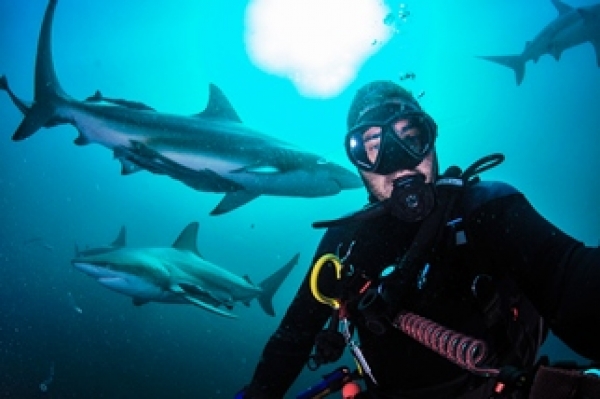 Simon has been face to face with all the so-called maneaters in several oceans and he feels they are mis-represented.  Having had his camera scratched by a great white shark and having had to push a tiger shark away with his bare hands, he feels that he has learnt how these magnificent predators function – and that they are not out to get people.  Even when he was cornered by a territorial silver tip while diving alone on a remote Micronesian atoll, he never felt threatened.  He felt that he was being communicated with, and he replied.

In this talk, Simon uses his award-winning photos, some of which were taking only centimetres away from sharks’ teeth, to explain how sharks and their unique biology come together. Through his personal stories of shark-filled canyons, giant pregnant whalesharks, hunting reef sharks and baby tiger sharks, he explains why diving and swimming with sharks is not dangerous, if you understand their nature and their behaviour.

Simon Lorenz is from Germany and was previously a career-focussed marketing manager.  Once he encountered a great white shark, he decided to become an underwater photographer, tour leader, author and dive instructor.  He is now a regular author for dive magazines and speaker at events.

His photographs and articles have appeared in a number of publications such as Sport Diver, Scuba Diving, CNN.com, Action Diver, DIVER UK, AsianDiver, ActionAsia, Plongeurs Intl, TAUCHEN, Unterwasser, and Dive Pacific. He has received several awards for his photos, most notably German Photographer of the Year in 2018, and is an Ambassador for various scuba brands.