Beyond the Clouds: A Journey through Northwestern Yunnan

Bruce Connolly
Monday, 10 May 2021
Google Calendar Outlook Calendar
7.00 pm to 8.00 pm
Webtalk
This talk is particularly suitable for our teenage members as well as for all adults. The event is free of charge for members. For guests or non members, the registration fee is $50. Please click into https://www.rgshk.org.hk/payment-for-bruce-connolly-s-webtalk-on-mon-10-may . The webinar link is going to be sent at 12.30 pm on Monday, 10 May.
Distinguished China photographer Bruce Connolly tells the story of his journey to Northwestern Yunnan in the early 1990s. Until then, Lijiang was a remote town on the former ‘tea horse trail’ to Tibet. So different to the modernising east of China, it was time-locked with a maze of cobble alleys, enclosed by ancient wooden buildings alongside gushing canals. The town was home of the Naxi people, continuing with their traditional lifestyles. 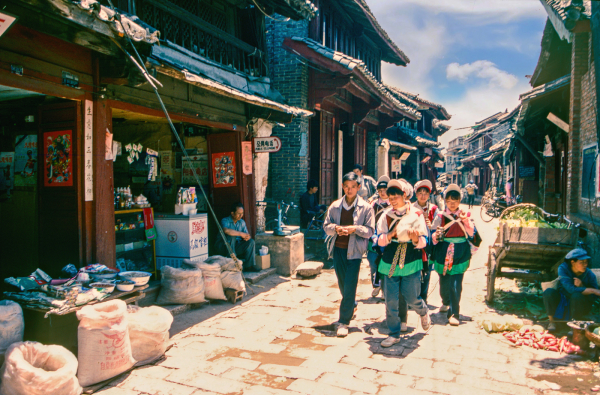 Bruce had been living and working in rapidly developing Guangzhou and vowed to reach Lijiang, though it remained isolated by geography and limited transportation.  He travelled for 54 hours by train from Beijing to Kunming before using a series of local buses initially to Old Dali before going up to Lijiang and the spectacular Tiger Leaping Gorge.  Finally, he reached remote Tibetan-influenced Deqen, today’s Shangri-la.  When he got back down to Lijiang, an airport had opened making Kunming only 40 minutes away, allowing mass tourism to commence.

Bruce Connolly is from the United Kingdom and studied Geography at the Universities of Strathclyde and Glasgow.  Passionate about his subject, he taught geography for many years.  Bruce was also an avid traveller and adventurer, embarking on major transcontinental railway journeys, mountain explorations in the UK, Europe, North Africa and more.  His stories he recounted regularly on BBC Radio Scotland and via lecture circuits for the Royal Scottish Geographical Society.

In 1987, he travelled overland by rail from Britain to Hong Kong.  China gripped his fascination, a country he knew so little known about.   An ambition evolved to travel its length and breadth, by train, boat, bus and on foot, with his camera, to photo-document the country before its inevitable transformation.  Today he lives in Beijing, where for 12 years he has had a daily radio feature, ‘Bruce in Beijing’, and has written countless articles and videos exploring Beijing and many parts of China.  His photography, recounting a personal view of the country and its people over 34 years, has been published widely both on-line, in print and exhibitions.  He appeared on ‘Scots in China’ shown on BBC television and worldwide.