Craig Mitchell, Paul Niel, Adam Janikowski and Dr Michael Rivera
Thursday, 10 Mar 2022
Google Calendar Outlook Calendar
7.00 pm
Webtalk
The event is free of charge for members. For guests or non members, the registration fee is $50. Please clickhttps://rgshk.org.hk/payment-for-project-avergener-s-webtalk-on-thu-10-mar. The link for this webtalk is going to be sent at 12.30 pm on Thursday, 10 March.
On 16 January 1945, a combined Air Group of US Navy airplanes set off from aircraft carriers in the South China Sea, for the heaviest bombing raids on Hong Kong during WWII. During the bombing raids, two Avenger aeroplanes collided amidst the chaos of intense anti-aircraft artillery fire, above Tai Tam Country Park on Hong Kong Island. The wreckage site had never been properly located and historical records were inconsistent...until now. 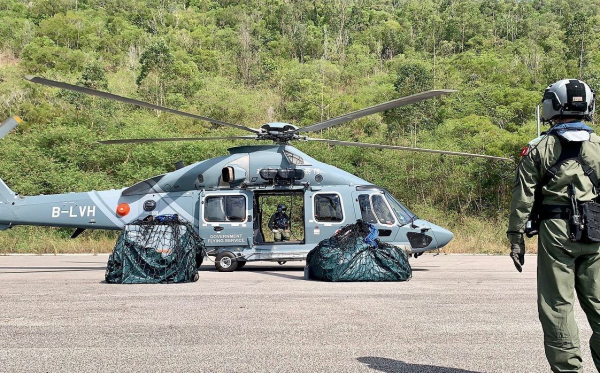 Craig Mitchell describes his extraordinary search, leading to the discovery of the first pieces of a TBM-1C Avenger on the side of Tai Tam's hills in 2012. This started a huge team effort and scientific endeavour to dig out the plane in 2021. This aircraft was one of 17 downed planes flying over Hong Kong as part of a defensive effort that day, during the final months of WWII.

In 2021, a team of archaeologists, military historians, adventurers, geographical surveyors, students and volunteers, organised by the Explorers Club, gathered together up in the hills of Tai Tam Country Park to investigate the remnants of the warplane. Paul Niel and Adam Janikowski, both of whom have climbed Mt Everest, describe what it took to manage, finance, acquire permits for and incorporate cutting-edge technology into Project Avenger, with the help of both local and international experts, collaborators and sponsors.

Then lead archaeologist Dr Michael Rivera talks about some of the significant finds from the archaeological site and where this strong team are excited to take this type of historical and scientific investigation next.

Craig Mitchell is from Hong Kong and has had an enduring passion for military history, in particular the Battle for Hong Kong. Craig discovered the wreck site in January 2012 after months of searching, after an initial small fragment was first found, and immediately started working to conduct a professional archaeological study. Craig leads a small team that studies the Battle for Hong Kong in meticulous detail and actively searches for evidence to document sites, before the passage of time erodes artefacts beyond recognition. He has discovered, explored and mapped dozens of Japanese wartime tunnels systems throughout the mountains of Hong Kong.

Paul Niel, FRGS, is from Austria and has travelled the globe for expeditions and other adventures, that have taken him to places as disparate as Kamchatka, the Arctic Circle and across the Atlantic Ocean on a sailing yacht. Over the last 10 years, he has successfully climbed the highest mountains on every continent, the celebrated “Seven Summits”, and became one of a handful of climbers to climb two 8,000m peaks within 24 hours, Mt Everest and Mt Lhotse. Paul has travelled to over 110 countries and drove a tuktuk more than 3,000km across India to raise awareness for girls’ education. Together with his wife, he completed the first coastal circumclimb of Hong Kong Island. He has produced three award-winning documentaries that have screened at festivals around the world.

Adam Janikowski, FRGS, is from Canada and holds degrees in Chemical Engineering and Classics from Queens University, Canada, an MBA from INSEAD, France, and a Masters in Mechanical Engineering from the Colorado Schools of Mines, USA. He is currently working on a doctorate studying the privatisation and commercialisation of the space resources industry. He has also been honoured with a Paul Harris Fellowship by Rotary International, a Baden Powell Fellowship by the World Scout Foundation and by the Scott Polar Research Institute of Cambridge University. He is a sportsman and adventurer, having completed the Boston Marathon and the Athens Classic Marathon, as well as having successfully summited Mt Everest, among numerous expeditions.

Dr Michael Rivera is from Hong Kong and holds a PhD from the University of Cambridge, United Kingdom. He is a researcher, educator, public speaker and biological anthropologist based at the University of Hong Kong. His main research focuses on human history and development over the last 6 million years. Dr Rivera is currently working on establishing a greater presence of bioanthropological and archaeological science in Hong Kong, in terms of research, teaching, laboratory science, fieldwork and public engagement projects.