Tianjin – the Historic Gateway to Beijing where East met West

Bruce Connolly
Tuesday, 29 Mar 2022
Google Calendar Outlook Calendar
7.00 pm to 8.00 pm
Webtalk
The event is free of charge for members. For guests or non members, the registration fee is $50. Please https://rgshk.org.hk/payment-for-bruce-connolly-s-webtalk-on-tue-29-mar.The link for this webtalk is going to be sent at 12.30 pm on Tuesday, 29 March.
Distinguished China photographer Bruce Connolly tells the story of Tianjin, now only 30 minutes south of Beijing by train, but a city with its own unique identity. Tianjin has been an important commercial and transportation hub since the 13th Century and historically it was Beijing’s water gateway, where a 70 km eastern branch of the Grand Canal intersected with the ocean. During the Ming and Qing Dynasties, it was one of northern Asia’s major commercial cities, with numerous International Concessions, while now it is a modern metropolis and on its way to becoming a smart city. 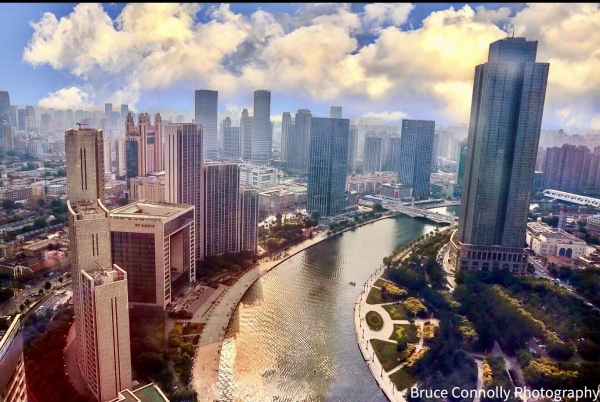 International Concessions, dating initially from mid-19th century had a profound effect on the city, leading the city became a leading financial centre replete with grand architecture. British and French concessions were followed by seven others, leading to a city which boasted trams, electric lights, schools, cathedrals, elite clubs, theatres and a cosmopolitan feel on a par with that of Shanghai. A mix of Victorian and even Neo-Venetian styles emerged, including a number of art-deco style department stores and theatres.

Victoria Road was labelled ‘China’s Wall Street’. The road is filled with the neoclassical architecture of former financial houses, whose occupants included HSBC, Swire and Jardine Matheson. This stunning architectural legacy is largely remaining, which presents both challenges and opportunities for the city.

Looking down upon the city from one of Tianjin’s tall skyscrapers, a futuristic skyline opens up. However, a stunning array of architectural heritage buildings in colonial styles are interspersed among this 21st-century Chinese metropolis. The extensive flat land is also interlaced by water channels – a city of bridges transformed nightly into a city of lights.


Bruce Connolly is from the United Kingdom and studied Geography at the University of Glasgow. Passionate about his subject, he taught geography for many years. Bruce was also an avid traveller and adventurer, embarking on major transcontinental railway journeys and mountain explorations in the UK, Europe, North Africa and more. His stories he recounted regularly on BBC Radio Scotland and via lecture circuits for the Royal Scottish Geographical Society.

In 1987, he travelled overland by rail from Britain to Hong Kong. China gripped his fascination, a country he knew so little known about. An ambition evolved to travel its length and breadth, by train, boat, bus and on foot, with his camera, to photo-document the country before its inevitable transformation. Today he lives in Beijing, where for 12 years he has had a daily radio feature, ‘Bruce in Beijing’ and has written countless articles and videos exploring Beijing and many parts of China. His photography, recounting a personal view of the country and its people over 34 years, has been published widely both on-line, in print and exhibitions. He appeared on ‘Scots in China’, which was shown on BBC television and worldwide.